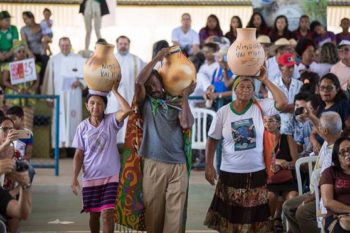 Brazil is one of the most biodiverse countries in the world and contains 20% of Earth´s water springs but these natural resources are under threat.

In the west region of Bahia, in the northeast of the country, communities are worried about the negative effects of land and power concentration. The region is home to riverside communities and peasants who for generations respected and lived off the land and water – fishing, harvesting and hunting, while preserving rivers and the cerrado vegetation. However, the arrival of agribusiness industries in the 1970s kindled a silent and dangerous war over land and water control.

Frictions reached a peak two years ago when one thousand people from the municipality of Correntina invaded a local farm business and damaged the machines to denounce the abusive use of water by the property.

The whole population of Correntina uses approximately 3 million litres water per day, which represents only 2,8% of the 106 million taken from rivers every day by one single farm business. This is what the ranch is legally allowed to use, but there is no enforcement of the legal limit. Public authorities are silent on the matter and are not providing credible answers to the communities, while the rivers are drying, and the population is lacking access to water.

The ACT Alliance Brazil Forum  decided to organise an Ecumenical Mission to assess the impact on the communities and the water resources. The mission, coordinated by Ecumenical Coordination for Service (CESE),  took place between the 3rd and the 5th October. A group of 70 missionaries from churches, faith-based organisations, social movements and international development organisations, including ACT members Christian Aid, Koinonia, Fundação Luterana de Diaconia, gathered in the region to: show solidarity with the people affected, raise awareness on the risks represented by the predatory use of rivers; sensitise churches, FBOs and other civil society on the the need to care for our common home, and finally to demand action from the State to solve the agrarian conflicts and protect the rivers.

During the 3-day mission the participants  took part in a public hearing with the state public prosecutor where local community members voiced their concerns, visited communities affected by droughts and illegal land grabbing to assess the damage and collect data, and held a public ecumenical celebration with clergy from different denominations.

The ecumenical movement is a powerful actor able to catalyse effective initiatives in defence of the poorest and most vulnerable populations in Brazil.

In the current context, as basic social, economic and human rights are being dismantled by the authorities, it is crucial that the ecumenical movement raises its voice to protect and alleviate the  suffering of the most vulnerable  and demand justice.

Below you can read the final statement of the mission.

On 03 and 04 October in the west of Bahia, we, representatives of different expressions of faith, provoked by the Ecumenical Coordination of Service (Coordenadoria Ecumênica de Serviço: CESE) and with support from the ACT Brazil Ecumenical Forum, undertook the 5th Ecumenical Mission in order to provide national and international visibility to water-related conflicts.

Our mission was held during the days when we remember and celebrate the charisma of Francis of Assis, who recognized Mother Earth, our Pachamama, as a living being, deserving of affection, care and love.  This spirituality, which understands that a human being is the smallest part of a complex web of life, is the force that sustains our missionary journey.

We were affected by the prophecy of denunciation at the public hearing from men and women who have suffered the impacts of an anti-democratic, capitalist system which denies traditional communities the right to exist.

The cries that we heard denounced the expansion of the tentacles of an exploitative system that transforms land and water into commodities, annihilating these two forces, which are expressions of the sacred for traditional peoples.

Shootings, land grabbing, harassment, the manipulation of information, the restriction of the right to come and go, pressure to leave your land, are all examples of the denounced violence.  In Barreiras, Correntina, São Desidério, Serra Dourada and other municipalities we identified how agribusiness functions in the region and in many other territories around the nation, in an authoritarian, aggressive manner, incapable of coexistence with the diversity of creation.

The dignity of those in this struggle, from the geraizeira (pastoralist), artisanal fishing and other traditional rural communities, provides the power that drives these communities’ capacity for resistance.

We do not want charity. We want our right to water and to maintain our traditional way of life.  This claim contrasted with attempts by public agents to provide responses to demands within a context of the absence of the Democratic State and where the prevailing option is for an agrarian policy that does not recognize traditional ways of life.

Given everything that we heard and learnt, it is fitting to share some fundamental challenges for the region:

“From the springs to the São Francisco River, water for life!”