ACT members in Lebanon are continuing to respond to humanitarian need after an explosion devastated Beirut on August 4, 2020. The ACT Lebanon Forum put out an appeal, which can be pledged to by contacting George Majaj.

Here are three stories, from the Middle East Council of Churches, the Department of Service for Palestinian Refugees, and Norwegian Church Aid, of the impact of the explosion and the work that ACT members are doing to respond to the needs that are so urgent in Beirut.

For every family in Beirut on August 4 there is a story; its effect touched the lives of thousands of people in the city most profoundly felt by vulnerable families.

Johnny the 47-year-old husband who lives with his wife Sally 50-year-old and their son Ramy 11 years old; along with his mother in law Maguy 83 years who has a hearing problem and Chronic diseases. The family live in Karantina, and their home is the second building facing the port.

During that evening the family was at home having dinner and Sally, was the first one to hear the first explosion and immediately the memory of the war flashed back and told her husband that there is something wrong. A few minutes later the whole family heard the big explosion and immediately ran away from the dining room to the hallway where it felt the safest place.

The power of the explosion shook the whole house down and the fridge moved from its place making a shield for the family and protected them from flying glass and windows. The house has five windows which all exploded and shattered everywhere.

Sally and Maguy were injured and Johnny’s eye was injured also. Ramy explains the horror and pain he felt during the explosion after seeing his family hurt. The family was in shock and the first thing that came to their mind was that the war is back.

Johnny’s story like many others is often delivered in tales of depression, of need and often hope. Since the explosion the family received help from several organizations; however, the family was extremely grateful by the support of MECC since it consisted of food, hygiene, detergent supplies that can support them for a few months along with mattresses and linens which was mainly their essential needs.

The family was grateful for that since there is always a fear of not being able to afford getting these essentials because of the economic situation, MECC alongside with local churches were able to support essential supplies to families in need and hoping to continue to meet other urgent needs.

Youth from DSPR’s Joint Christian Committee for Social Service in Lebanon programme have been working tirelessly since August 4 to help clean up the blood and debris from the explosion.

These teens have been volunteering to remove debris, clean up homes, and to do whatever else they can to help those affected by the blast in Beirut. Many of them were also impacted by the explosion.

17-year-old Vanessa says, “I was there that same day. I was with my family going to Damour (south of Beirut). We had crossed the port when the explosion happened. We got out of the car. There were people everywhere, covered in blood. Some people were dead. I tried to help. There was so much blood.”

The teenagers practically grew up together at their hillside mountain Palestinian residences, known as the “Dbayeh camp.” As Palestinians, their futures are bleak. Palestinians are barred from acquiring Lebanese citizenship, and thus acquiring Lebanese identity cards, which would entitle them to government services, such as health and education. They are also legally barred from owning property and prohibited from working in over 60 skilled jobs.

“Even if we are Palestinians,” said 18 year-old Jubran, “We live here. We must help.”

“We kids cannot rebuild [their] home[s],” said Rudolph Habib, “We don’t have money to help. All we can offer is our youth. The capability of cleaning and carrying things for all these people.

Read the full story from DSPR-JCC. 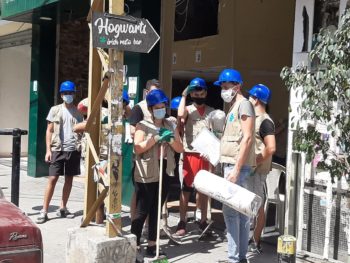 The 4th of August 2020 deprived Hayat from a safe modest home, her source of living but most of all her son. Hayat a 65 years old woman living in Ashrafieh has endured the long years of civil war in Lebanon with her daughter Nancy and her son Shadi. Despite all her suffering, Hayat is a survivor and a strong mother who managed to stand on her feet to be supporting her family who needs her.

During the Lebanese civil war, Hayat’s son, Shadi, lost his capacity to speak and hear when a bomb exploded next to their home. He was then a two years old child. Thirty-six years later, Shadi was killed in the Beirut Blast, where he was buried under a destroyed three storey building.

Hayat was watering the flowers in front of the nearby church and Shadi was visiting a friend nearby, when the explosion ravaged their neighborhood. Hayat’s daughter and neighbors ran to her rescue as she was thrown on the floor drenched in blood and directly took her to the hospital to treat the wounds caused by the shattered glass all over her head, chest and hands.

As soon as Hayat’s wounds were treated, a painful journey started in search of her son. Relentlessly, she toured the hospitals holding her son’s photo, hoping to find him among the wounded worried that he cannot provide his name being deaf. It was until the next day when the civil defense team found Shadi’s body under the wreckage of his friend Issam’s collapsed building.

Thanks to the ACT appeal funds, NCA is supporting IOCC to rehabilitate Hayat’s house. Hayat and Nancy have this house as their only shelter. The explosion caused damage to the ceiling and the walls, and broke the door and the windows of their house. But now, despite all her pain and sorrow, Hayat considers the support to be a gift from God. She was hesitant to believe that someone would come to help her till she met the engineers who visited her house to assess the damage. Then, in no time, the contractor started the work to ensure that the family house is ready before winter hits Beirut.