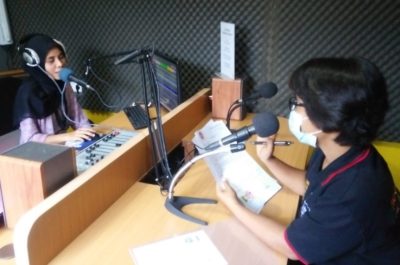 Soon after the severe earthquake and tsunami of 2018 in Indonesia’s Central Sulawesi province, ACT member ICAHS-PELKESI started to share information for the communities affected by radio.

Members of more than 2,000 households in Central Sulawesi were displaced as a consequence of the disastrous earthquake, the subsequent tsunami and liquefaction in 2018. Most are still forced to stay in densely packed temporary shelters. In this region, online meetings are neither suitable nor effective.

In order to reach the communities affected by the disaster and to follow the pandemic health protocols, the Indonesian Christian Association for Health Services (ICAHS/PELKESI) started to spread programme information through radio broadcasting in the capital of the province, Palu. ICAHS/PELKESI supports activities in ten villages to increase knowledge and skills of the inhabitants and to be more prepared and resilient in the future through these broadcasts.

Primary health care and disaster risk reduction are two relevant issues that ICAHS/PELKESI broadcasts about. For example, the local Disaster Preparedness Group of a village called Enu was asked through radio broadcast to manage their surroundings and sanitation properly and inform their community to dispose of their household waste on a daily basis.

Adapted to times of COVID

On the radio channel of MS radio – a local radio station on 98.3 FM – 50,000 or more people can be reached daily in the districts of Donggala, Sigi and Palu, which were most heavily impacted by the earthquake. During a broadcast held on October 23,2020, PELKESI shared the names of the ten villages where the Disaster Risk Reduction program would be implemented next by the host government through the Disaster Preparedness Group.

The communities were reassured that ICAHS/PELKESI would support them in installing a new evacuation route, properly based on the Indonesian authority standard. The local Disaster Preparedness Group (consisting of health cadres of the villages in collaboration with the village youth leader, the village chief and the regional disaster management office) were requested to design the programme. At the same time, the communities were encouraged to apply for resources from the village grant fund.

One listener asked about the challenges faced during implementing the Disaster Risk Reduction program in the village and learnt that the pandemic significantly affects the PELKESI’s programme implementation because the meetings with the government, the communities and some stakeholders could not take place. Because of this, the programme would have a delay of two months after the first COVID-19 patient was found in Central Sulawesi.

Handing over to the communities

ICAHS/PELKESI encouraged and coached the representatives of the communities to introduce the programmes they run in their villages themselves on the radio. This method is very effective to improve their ability to convey ideas and even advocate their rights in public. The skills and bravery they build up will be helpful in the future.

Through radio, the community can speak about the rights of children, and can inform expectant mothers about how to get financial means from the village grant fund and how to receive supplementary food from the integrated health services each month.

The radio broadcasts also highlight the rights to public information and to participatory access to the village grant fund hosted by the government. Mohammad Reza, the secretary of the village Wani Dua in Donggala district for example, learned from the radio programme that the public had rights to access the village grant. He was invited as an interviewee in May 2020.

Afterwards he said, “After PELKESI engaged our health cadres on their programme, I realized that more people came to the formal meetings related to the village grant and that they applied for several programmes. Now I know why our health cadres are braver than before. PELKESI informed them about their rights in a proper way and it is always helpful for us as government to be more transparent”. Another positive outcome of the radio broadcast activity is that the whole MS radio crew is now informed about the importance of the evacuation route and can support the population in case of emergency.