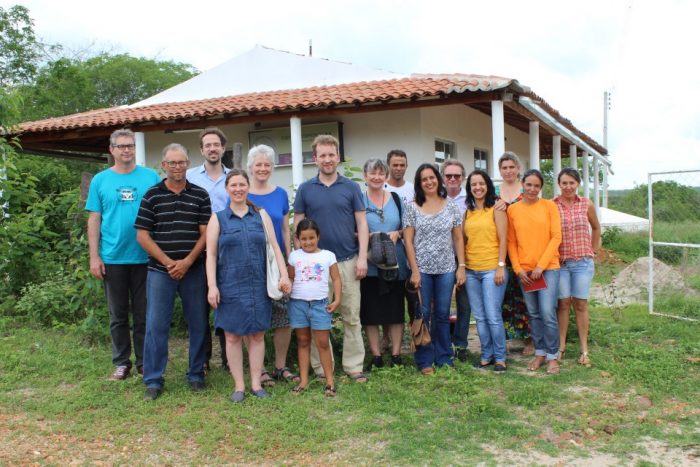 Members of the German organization for international cooperation Brot für die Welt, one of Diaconia’s historical partners, were in Pernambuco between 7th and 10th of this month to learn about the experiences developed by the organization concerning the coexistence of the semi-arid climate facing the climate changes. The delegation travelled to Sertão do Pajeú for some field trips and exchange activities. The delegation was composed of the general coordinator of the organization for Latin America and the Caribbean, Danuta Sacher, and her team Tina Kleiber (Projects), Sabine Minninger (Climate), Andreas Behn (Journalist), Eike Zaumseil (Climate and Agriculture) and Joachim Funfgelt (Renewable energy). The visit was accompanied by a team of journalists from the German state TV ZDF who went into the hinterland to produce materials about Diaconia’s activities.

According to Tina Kleiber, Project Officer for Brot für die Welt in Latin America and a member of the Brazilian team, the main purpose of the visit to the hinterland was to get to know better the partners organizations and what has being done to improve the coexistence of the local population facing the effects provoked by climate changes that reach the country. «We are here in Pernambuco with three experts in the Climate area of the organization. We want to know how organizations are working on this issue, once one of our concerns is about climate change and its consequences.” Tina also drew attention to the upcoming United Nations Conference on Climate Change, COP 25, which is a global event to discuss countries’ actions to curb climate change and reduce global warming. «The COP is likely to happen here in Brazil in 2019. And we are already preparing for our political incidence within the event. That’s why we came to the country to understand the effects of climate change» she added.

On the first day of activities, the team went to the field to learn about the social technologies developed by the families advised by Diaconia. The visit was in the rural property of the young farmer Maria José Martins, in the community of Barreiros, Carnaíba municipality, about 20 kilometres away from Afogados of Ingazeira. There it was possible to check the many ways of water storage, very important for the families in the hinterland. In the afternoon, the delegation went to the municipality of Sertânia to visit the East Axis of the Integration Project of the São Francisco River, responsible for bringing water from the river to distribute to about 4.5 million people in 168 municipalities that suffer with the sustained drought in Pernambuco and Paraíba. The axis goes through the municipalities of Floresta, Betânia, Custódia and Sertânia in Pernambuco until the municipality of Monteiro in Paraíba.

On Thursday (09), the team went to the municipality of São José do Egito to learn about another experience in the homestead of the farmer Ivoneide Leite, wife of the farmer Marcelo Carneiro. Both are at the head of the Agroecological Association of Sertão do Pajeú (AASP), which serves approximately 60 farming families. The group was taken to an area of about one hectare where Diaconia and the farming family are carrying out – with the support of Brot für die Welt – an experience of recovery the soil degradation for the cultivation of forage plants such as cactacea and other resistant native species to ensure animal feed during periods of drought. The experiment started one year ago and it is already possible to see plants growing from the soil in the process of recovery, like the forage palm. «This area still will be completed, but it is already gratifying to see some species that we planted back there to growing up, which will help us feed our animals. We are very pleased with the idea that Diaconia has brought us”, said Ivoneide.

After the visit, the delegation participated in an institutional conversation with the leaders of Diaconia and also with the Executive Advisor of the Articulação do Semiárido Brasileiro – ASA Brasil, Alexandre Pires. During the meeting, there was a general presentation about Diaconia as well as a discussion of the work of the organization in semiarid territories. Danuta Sacher, general coordinator of Brot für die Welt for Latin America and the Caribbean, praised the actions taken by Diaconia and its partners in the territories. «We are very happy to have found in Diaconia an allied and very capable organization, which demonstrates a very strong articulation with the local population and also in the metropolitan regions of Recife and Fortaleza. We have seen several examples of the excellent work done. There are many wonders discovered through Agroecology such as the importance of the use of water that we saw on the homesteads we visited. »

Waneska Bonfim, political and pedagogical coordinator of Diaconia, considered the visit as a very special moment to discuss and present the organization’s work to experts from other countries. «These experts had the opportunity to get to know the Semiarid of Brazil and also the opportunity to see closely and in practice what it is possible to do to live with this climate, much more than they are told by reports. The possibility of having the visit of this group, which is a partner organization for many years, demonstrates recognition of our work and that makes us feel partners of international cooperation in Brazil”, she added. From Pajeú, the delegation went to the World Social Forum in Salvador and from there to the Alternative World Water Forum in the Distrito Federal. Both events will start this week and Diaconia will participate.

Read the article in Portuguese here

"We are here in Pernambuco with three experts in the Climate area of the organization. We want to know how organizations are working on this issue, once one of our concerns is about climate change and its consequences.”

Communities in the Sertão do Pajeú in Pernambuco