ACT Alliance members in Indonesia: Preparing the communities to respond better to disasters 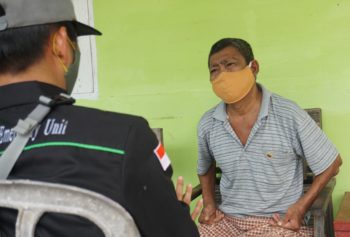 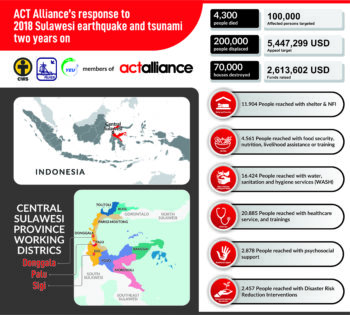 ACT Alliance has supported the communities that were affected by the earthquake and subsequent tsunami in September 2018 through its members in Indonesia. Two years later, we went back to the people we assisted to see how they have recovered.

The 7.5 magnitude earthquake in Central Sulawesi, Indonesia, had disastrous consequences, as it also triggered a tsunami which hit the provincial capital of Palu. More than 4,300 people lost their lives, over 200,000 were displaced and nearly 70,000 houses destroyed. Many shops and other small businesses as well as the irrigation systems for family farms were destroyed, causing countless families to lose their incomes.

ACT Alliance members Yakkum Emergency Unit (YEU), Indonesian Christian Association for Health Service (ICAHS/PELKESI) and Church World Service (CWS), with their partners coordinated, their responses through the ACT appeal, targeting 100,000 vulnerable people affected by the earthquake and tsunami. All three organisations supported the Sigi district in Central Sulawesi, which had one of the highest numbers of casualties caused by mudflows and liquefaction after the earthquake. Several aftershocks damaged more buildings and houses causing even more people to become homeless.

More independence for people with disability

One of the persons supported by ACT Alliance in the Sigi district is Sudirman (picture above right), a man who has lived in Ngatabaru all his life and is paralyzed from the waist down. He can inspire you with stories about his adventures as a driver for tourists before his sickness made it impossible for him to drive again six years ago. After that, it was difficult for Sudirman to move around his house – even going to the toilet was an ordeal on his own. He needed a caretaker all the time.

Sudirman’s house was damaged by the earthquake and he and his family had to live in the part of it which was relatively safe for them. YEU organized workers to help them build a new home specifically designed for people with disabilities. Sudirman and his wife assisted, supervising the work and selecting the materials used. With YEU’s support, they could also learn new skills and earn some income while work was difficult to find. His new home allowed Sudirman better mobility which made him more independent. He and his family, in YEU trainings, learned more about how to manage his health issues. The house was completed in April 2019, and he has been living there ever since. “I can now do things on my own without needing a caretaker with me all day, since I can move around the house without assistance. My family also knows how they can support me better while also enjoying their own lives”, he says.

Focus on infrastructure as well as on psychological aspects

Disasters often leave people traumatized as they have to handle their losses and recover from the fear they experienced. YEU trained schools and communities on psychosocial care and support while at the same time ensuring safe space and a protected environment to develop, learn, play and build resilience.

CWS provided water tanks and safe water during the early days after the disaster in Sigi while they as well as the government worked on repairing pipelines and improving water supply in the villages. The organisation also supported communities to set up Water Management Committees so that people could manage the water system themselves when the project ends. “We now have enough clean water, without needing to worry about where to get it. Better still, we are managing the water system ourselves, so we know that when something goes wrong, we can fix it”, says Badrun, Committee member in Sikara Tobata village, Donggala district.

Maslia, a village health cadre from Enu, Donggala, received health training and support from PELKESI which she was grateful for since their health clinic was closed for several months after the disaster. PELKESI’s mobile clinics with volunteer doctors and nurses provided the health services during this period, while the government health clinics were unable to do so as the staffs were affected by the disaster themselves. Health workers and villagers in the areas where PELKESI was active after the disaster learned about traditional health techniques, acupressure, and herbal medicine using local resources. Mothers were also taught how to cook food using local foodstuffs and herbal drinks from plants that they used to think of as weeds or useless, that can be found in their backyard.

PELKESI assisted the health cadres to get an official policy and budget to provide supplementary food for the infants and toddlers in ten villages (Simoro, Tuva, Sibalaya Utara, Sibalaya Barat, Pantoloan, Baiya, Enu, Lero Tatari, Desa Wani Satu, Desa Wani Dua) through a village grant. Before the earthquake and tsunami, there were only two villages which provided supplementary food cost for children. Now, through several discussions between health cadres and host governments, all ten villages have policies to provide budget for supplementary food for children. This achievement is particularly meaningful during the COVID-19 pandemic.

New ways to earn a living had to be found after the disasters. Yohanes Rombe a year ago was able to plant corn, peppers, and other vegetables thanks to irrigation being available for the crops from a new well built by CWS. He has now been able to harvest a crop to feed himself and his family

Besides facilitating farming by building or re-establishing irrigation systems, CWS and its partners also collected new ideas from community members to restore or create opportunities to earn a living. These initiatives were initiated months before the outbreak of COVID-19, but later on also helped people to get through the lockdown. Introducing relevant safety measures, people could still run their local kiosks, do fish farming and drying, brown sugar milling, produce snacks and coconut oil for home use. “We learnt how important it is for all of us to think of alternative ways to process and sell our local products. Why shouldn’t we do something new with it?”, states Mirnawati from Lende Tovea village, Donggala district.

How did COVID-19 change the situation?

Due to the pandemic at the beginning of 2020, humanitarian response activities that were nearly done had to be slowed down or adapted. Prevention education needed to be prioritized, printing and distributing educational materials for families and leading public education and correct information sharing about the virus. ACT members adhere to health protocol as required in all of our interventions through several actions; did local radio broadcasting in Palu, introduced safety measures to staff and visitors in hospitals, were active on social media, and distributed face masks for the vulnerable groups (elderly, persons with disabilities and children). Although having to deal with COVID-19 represented an additional challenge to the disaster response, the ACT Alliance members are optimistic that they will reach the objectives of the appeal in the coming months.

What is needed for the future are educating communities on the importance of growing vegetables and fruits for food security, health trainings and hygiene promotions to prevent the local transmission of the virus, ensuring permanent safe-water (gravity-fed piped water systems and boreholes), livelihood supports for small and medium enterprises (including home-based business) and community-based disaster preparedness initiatives.