In the evening of Wednesday the 24 January 2018, refugees fleeing fighting in South Kivu started streaming in Makamba and Rumonge Provinces aboard boats. Since August 2017, the security and humanitarian situation have significantly deteriorated in South Kivu, more specifically on the axis Sebele ‐Kikonde‐Kazimia, the southern coast of Kazimia (Yungu, Talama) and the coastal communities of Ubwari in the Fizi area. On-going clashes between the army FARDC (Democratic Republic of Congo Armed Forces) and the Mai Yakutumba rebel armed group—claiming to be from the National People’s Coalition for the Sovereignty of Congo (CNSPC)—are behind this deterioration of the situation since January 2018. Thousands of children, women and men have abandoned their homes, in the midst of intensified military operations against Mai-Mai armed groups in South Kivu province. Almost 7,000 people have crossed to neighbouring Burundi and an additional 1,200 to Tanzania. It is believed that many more are displaced inside South Kivu in difficult conditions without shelter or food.

Those refugees seeking to reach Burundi are mainly doing so by crossing Lake Tanganyika on small fishing boats. As of 28 January 2018, according to authorities in Burundi, 8,152 persons have crossed Lake Tanganyika and settled into Burundian provinces of Rumonge and Makamba (this includes 6,934 Congolese and 1,218 returning Burundians). On 29 January 2018, 823 additional persons arrived in Burundi. It is therefore estimated that a total of 9,078 people crossed to Burundi so far.

ACT Burundi Forum is planning to implement a project to provide life-saving assistance to Congolese refugees and host communities in Burundi. The project will reach a total of 6,578 households (3256 male-headed households and 3322 female-headed households). In total, about 32,890 individuals will be reached with food, cash and WASH interventions. 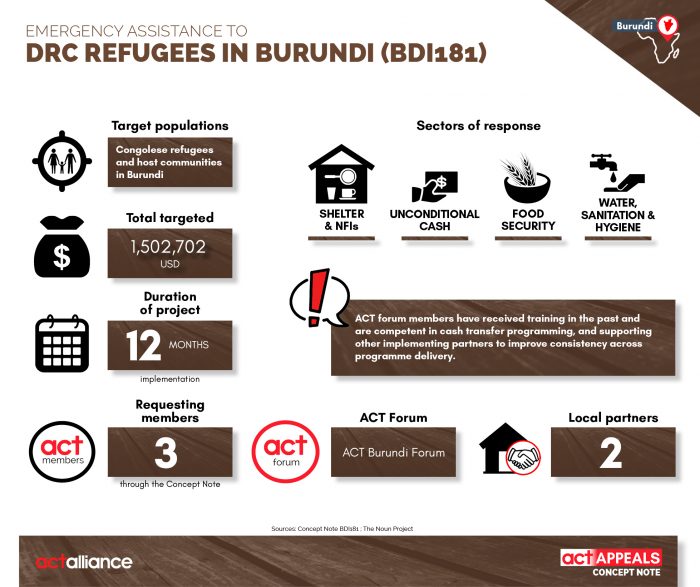