2018 Symposium on the Role of Religion and FBOs. Perspectives on Migration: Displacement and Marginalization, Inclusion and Justice 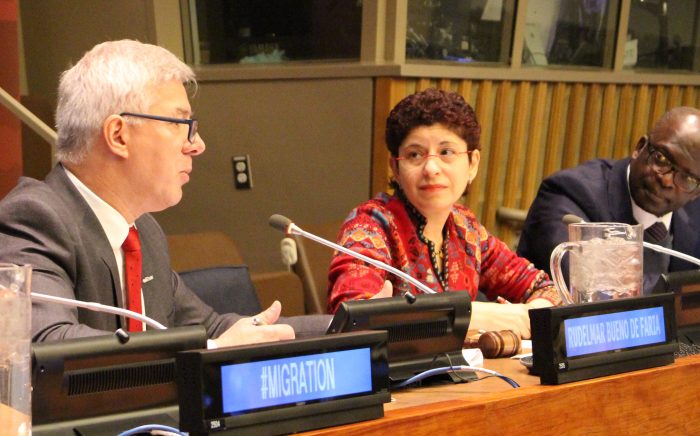 “Migration has been a feature of human history from the beginning. It is not in and of itself a “problem” that needs to be fixed. What needs fixing is the continued violation of the human rights of migrants.” – Rudelmar Bueno de Faria, General Secretary of ACT Alliance.

The Fourth Annual Symposium on the Role of Religion and Faith-Based Organizations (FBOs) in International Affairs with a focus on Perspectives on Migration: Displacement and Marginalization, Inclusion and Justice took place on January 22, 2018 at the United Nations Secretariat in New York.

The Symposium was organized by ACT Alliance, the World Council of Churches, General Board of Church and Society of the United Methodist Church and General Conference of Seventh-Day Adventists, in partnership with Adventist Development and Relief Agency, Parliament of the World’s Religions and the United Nations Office on Genocide Prevention and the Responsibility to Protect, on behalf of the United Nations Inter-Agency Task Force on Engagement with Faith-based Organizations.

“The dignity of people on the move is under threat. This has become increasingly common through; a lack of access to status determination procedures for refugees; a risk of refoulement to places where the lives of people are in danger and; detentions and chain deportations that continue to tear families apart,” said Bueno de Faria.

The Symposium brought together approximately 250 participants over the course of the day from UN Member States, United Nations agencies, FBOs and wider civil society to share and engage in a stock-take on the way forward before the first draft of the Global Compact on Safe, Orderly and Regular Migration is to be released in two weeks. Discussions during the day reflected on the significance of the Global Compact and urged member states and civil society to work together for an enhanced multilateral cooperation on migration.

“We have witnessed a declining willingness by states to be bound by international legal obligations – not just with regard to migrants and refugees, but also in areas such as, climate, development and gender equality,” said Bueno de Faria.

“The Global Compact should depict a clear roadmap for implementation with a strong, transparent and participatory monitoring mechanism. There should be no hiding behind the mantra of sovereignty when human dignity is under threat,” he continued.

In a separate panel focusing on Development, Humanitarian and Human Rights Perspectives, Christian Wolff, Programme Manager on Migration & Displacement for ACT Alliance, highlighted the work of ACT members in South Asia, the Middle East, and Central America in defending migrants’ and displaced people’s access to rights. These examples were used to frame several key advocacy goals with regard to the Global Compact, including the need for improved access to justice and recruitment reform, an increase in regular pathways for labour migration, and the strengthening of measures to enable family reunification.

Reflecting in particular on the situation of irregular migrants in the U.S. and Europe, Wolff criticized some governments’ focus on streamlined procedures for returns and readmission in the Global Compact, and called upon churches and FBOs to take a strong position on this issue vis-à-vis their governments.

“When people are being offered inducements for premature returns to countries where their safety would be at risk, often under threat of deportation, the so-called ‘voluntariness’ of such returns is called into question, and FBOs need to be clear in calling this out as unethical,” Wolff said.

“We also need to do more to interrogate the concept of ‘reintegration’ in programmes which often do not take into account the perspective of migrants themselves,” he continued.

Calling upon FBOs to not allow returning states to abdicate their responsibility for the human rights of people being returned, Wolff also demanded more transparent and independent post-return monitoring mechanisms. He warned that these are issues which are difficult for many operational agencies, in an era when more and more funding was being diverted towards programmes focusing on so-called “assisted voluntary return and repatriation”. “FBOs must follow clear guidelines to avoid becoming embroiled in unethical practices in this area,” Wolff said.

Through its membership of churches and FBOs, ACT Alliance continues to strengthen its operations on the ground through advocacy, development and humanitarian work. ACT Alliance recognizes its ethical and moral role in responding to and countering the racist, discriminatory and xenophobic narrative around migration and migrants and is committed to continuing to fight alongside migrants and relevant actors in the struggle to maintain and defend the human dignity of migrants.

Updated January 24th, 2017 to include quotes from Christian Wolff