A call to silence the guns in Africa 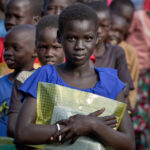 A girl awaits the beginning of classes at a primary school in Akobo, South Sudan.
The combination of fighting and flooding has worsened food insecurity in this area.
Photo: Paul Jeffrey /ACT

As the African Union heads of state meet for their 35th Summit on February 6 and 7, we join our ecumenical partners and ACT Alliance members in Africa urging them to prioritise peace and human security on the continent.

Violent conflicts in Africa have long, complicated antecedents related to injustice and the proliferation of Small Arms and Light Weapons (SALWs). The consequences of armed conflicts, wars and civil unrest have detrimental effects on communities. They affect all spheres of life and include severe social, economic, and psychological impacts on those exposed to violence, disaster, and loss. The effect on people’s well being can be both immediate and long-lasting. Be it physical or mental, peace and human security is fundamentally important to us all.

Several African countries and subregions are currently experiencing various forms of violence and disruption. These are due not only to political instability, but also to climate change. ACT Alliance’s global strategy includes a key thematic focus on peace and human security, with collaboration between ACT members, partners, and other key stakeholders.

In Africa, millions of people are in dire need of humanitarian aid, brought about by displacement and armed violence in their countries. It is therefore important to silence the guns at the source by addressing the root causes of insecurity.

Sustainable Development Goal 16, which focuses on building peace, justice, and strong institutions, is far from being reached in many nations, not only in Africa but globally. Why? Mainly because of the links between peace and security and other ACT Alliance thematic areas such as gender justice, climate justice and migration & displacement.

While there may seem to be little hope, it is our mandate as faith actors and faith-based organisations to work with each other and in solidarity with other stakeholders such as national governments and inter-governmental agencies, to foster peace and harmonious co-existence. We will not achieve much working in isolation, but together we can build sustainable peace in our communities.

We must put our efforts into strengthening collaboration and partnerships at the grassroots, national, regional, and international levels. We cannot forget the significant role of women and youth in peacebuilding and need an inclusive approach that allows everyone to participate and act for peace, leaving no one behind.

We are all called to be instruments of peace and we should heed the call by being our neighbours’ keepers and spreading peace wherever we are; above all we shall be called Children of God.

We urge Africa’s heads of state to fulfil their commitments to silence the guns and foster peace in their countries, and to strengthen collaboration and partnerships at all levels.

Elizabeth Kisiigha Zimba is the ACT Alliance Regional Representative for Africa and ACT focal point for Peace and Human Security.