ACT Alliance at the Stockholm Forum on Gender Equality 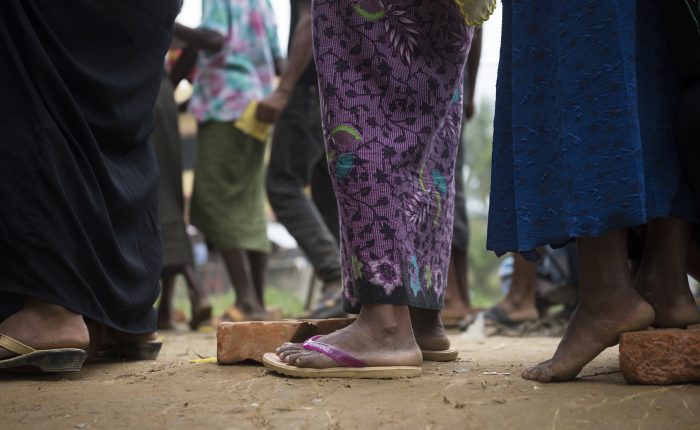 Women and children displaced by the Rohingya crisis wait in line for humanitarian aid at the Chakmarkul refugee camp in Bangladesh. Photo: Joel Carillet/ACT Alliance

The Stockholm Forum on Gender Equality (15-17 April, 2018) brought together over 700 activists, academics, politicians and civil society representatives from over 100 countries.

The Forum, which aimed to make progress towards a more gender-equal world was hosted by the Swedish government, the Swedish International Development Agency, the Swedish Institute, and the Folke Bernadotte Academy.

Rudelmar Bueno de Faria, ACT Alliance’s General Secretary participated in the Forum, and served as the moderator of a discussion on religious legislation and norms, co-organized by ACT member Church of Sweden and the Swedish Association for Sexuality Education (RFSU). He also engaged as a panellist at a side event on gender inequality and development cooperation. The side event was hosted by the Confederation for Relief and Development (CONCORD) on, “Tackling global gender inequality through development cooperation and feminist policies.”

Panellists explored the role of civil society, government, and donors to contribute to a more gender-equal world. They identified that tackling the critical global problem of gender inequality will require more feminist policies across the world. In addition, in order to promote a more prosperous development agenda, there will need to be a more balanced engagement and inclusion of all women, at all levels of decision making and implementation strategies.

A major concern raised by ACT Alliance is the threat that is posed to the rights and dignity of women on the move. “Women make up about half of the world’s 244 million migrants, and half of the world’s 65 million displaced people. A vast majority of them are insufficiently protected,” said de Faria. “In addition, the policies that have been created and implemented to protect women migrants and women who have been displaced, too often fall-short, and do not offer adequate protection.”

ACT members that engage with people on the move at various points of their journey recognize that those seeking to reach international protection face tremendous difficulties that are exacerbated by increasingly stringent border control measures. “Using border control measures as the primary tool for addressing irregular migration increases situations of vulnerability for people on the move,” said de Faria.

This is particularly true for unprotected women and children who are forced into unsafe and exploitative channels of migration. The risk of exploitation and trafficking is not only pertinent to women who are seeking protection, but also for those who are migrating for better work opportunities.

Women migrants are important global economic actors as 72.7% are part of the labour force. It was estimated that in 2015 international migrants had sent $432.6 billion in remittances back to their home countries. This amount is almost three times the amount of Official Development Assistance, which totalled $131.6 billion for that same year. Many families rely on remittances for improved access to health services and greater livelihood opportunities. Remittances also play an important role in strengthening economies.

The lack of regulation of labour migration, which may foster poor social protection systems, is a particular concern for many women who are employed in the informal sector and in domestic work.  “Domestic work is not even covered in the national labour laws of many countries. This poses significant threats to gender justice and gender equality, as women make up 73.4% of international migrant domestic workers,” continued de Faria.

ACT Forums and members are directly involved in implementing programmes which challenge gender based inequalities, empower women, and safeguard the rights of women and girls on the move. Some ACT members are engaging at the community level to provide immediate humanitarian assistance for displaced peoples for example, in South Sudan, Uganda, and Bangladesh.

Other ACT members are supporting the reception and integration of migrants and refugees into their local communities and are providing skills-based trainings and other supports to help displaced women to rebuild their lives.

ACT is further engaging in advocacy at the international level to fight for gender equality and for justice and solidarity with people on the move in various intersectional platforms, including the recent Commission on the Status of Women (CSW), and the Commission on Population and Development (CPD).

ACT is committed to continue to advocate for the protection of human rights and dignity for all, regardless of their status.