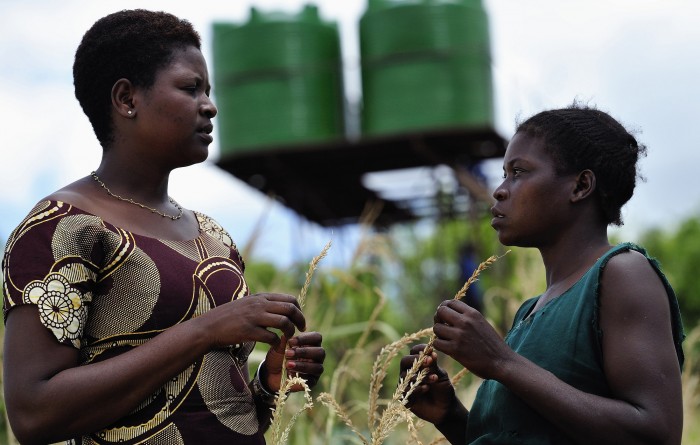 Manes Steven (right) stands in a dried up cornfield with Chifundo Macheka, a project assistant for Churches Action in Relief and Development, a member of the ACT Alliance. They are in Chisatha, a village in southern Malawi where ACT Alliance has worked with farmers to switch to alternative, drought-resistant crops, such as millet, as well as using irrigation and other improved techniques to increase agricultural yields. Photo: Paul Jeffrey

ACT Alliance stands as a progressive faith voice for advocacy on gender equality and justice. The 61st session of the United Nations Commission on the Status of Women (CSW) in New York provides the potential for members of ACT Alliance to actively engage and influence the CSW negotiations and the official text of its message.

ACT members will raise awareness of faith-based organizations’ work and ability to challenge existing power structures, harmful and discriminatory social norms and address barriers to gender equality.  The important work of strengthening the visibility of faith voices and faith communities will be put on the agenda at CSW in collaboration with UNFPA and the World Council of Churches at the side event: Protecting bodies, protecting rights – Religious and customary law enabling economic empowerment? on March 14.

“National constitutions are increasingly likely to guarantee gender equality, but many also recognize the authority of parallel legal systems based on custom or religion,” said Gunilla Hallonsten, ACT’s Program Manager for Gender. “Our side event approaches the complex matter of parallel legal systems, which have implications for women’s economic opportunities through family, marriage and head of household laws that impact women’s ability to access inheritance, own property, open bank accounts and start businesses. The gap between women’s legal rights and their ability to claim them is significant.”

The side event will also engage with the depoliticizing of women’s health to achieve equal access to health systems, including sexual and reproductive health rights, and further discuss the implementation of laws at national, regional and global levels to guarantee a life free from gender-based violence, exploitation, discrimination and fear.

ACT, in a statement to the CSW, encourages UN agencies, member states, faith-based organizations and the civil society to act together to protect the rights of women in situations where parallel laws discriminate against women and girls. The statement also calls on these bodies to recognize the active role faith, and communities of faith, can play in promoting women’s economic rights and empowerment.