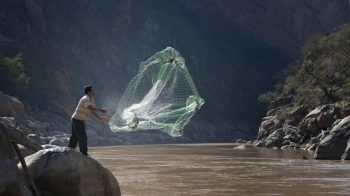 Tomas Rivero casts a net as he fishes on the Pilcomayo River outside of Villamontes, Bolivia. He is a leader of the Union of Pilcomayo River Fishers, and an advocate for cleaning up the river, which has been plagued by contamination from upstream mining and road construction. Photo: Paul Jeffrey

As the world’s largest Orthodox and Protestant network engaged in humanitarian, development and advocacy work, ACT Alliance was present and represented by the United Church of Canada, the Anglican Development Services of Kenya and ACT Secretariat staff. Along with other civil society organisations, ACT Alliance explored the potential for strengthening the role of faith-based organisations (FBOs) in the implementation of the 2030 Sustainable Development Agenda.

The recognition that environmental stewardship requires commitments from a variety of stakeholders was evident in the diverse representation of actors to the UNEA consultations. A special invitation this year from the UNEA to FBOs to contribute to the consultative process is further reflective of the growing interest of multilateral organizations including UNEP to engage with and benefit from the diversity of experiences and perspectives of FBOs.

ACT Alliance supports the notion that an appropriate remedy to environmental concerns will require the engagement of all. However, there will need to be a differentiated level of responsibility in the efforts of certain actors. “The reality that we are facing today is one where those who are the least responsible for environmental degradation are most affected by it. It is the moral and ethical responsibility of those most responsible to take extra efforts to address the problem,” said Gezahegn Gebrehana, ACT Alliance Regional Representative for the Africa region.

ACT Alliance provided inputs to the draft strategy document of the UNEA Secretariat. ACT emphasized the importance of the role of faith leaders in combatting pollution and urged the UNEA to consider further the experiences, beliefs and perspectives of people of different faiths, as well as those of indigenous peoples. In order to work towards a more inclusive structure, ACT Alliance has suggested the creation of a network of FBOs with a focus on environmental issues.

Within the ACT Alliance this has the potential to come to life in the form of a Community of Practice. A dedicated network would allow for a more thorough engagement of FBOs with institutions like UNEP, creating a potential to transition away from individual consultative events towards an ongoing and constructive dialogue that is reflective of environmental situations and realities.

“We are currently at a point where there is great danger posed to the planet. At the same time, there is an opportunity in front of us. Opportunities can only be effectively realized if stakeholders understand the gravity of the problem and work together on an ongoing basis,” said Isaiah Toroitich, Global Advocacy and Policy Coordinator of ACT Alliance.

The involvement of ACT Alliance in such platforms presents an opportunity to further develop dialogue and partnerships between the UN and other organizations. “There is a lot of work to be done. We need to start from where we are, use what we have and do what we can,” said Peter Denton of ACT Alliance member the United Church of Canada.

More information on the outcome of UNEA 3 can be found here.