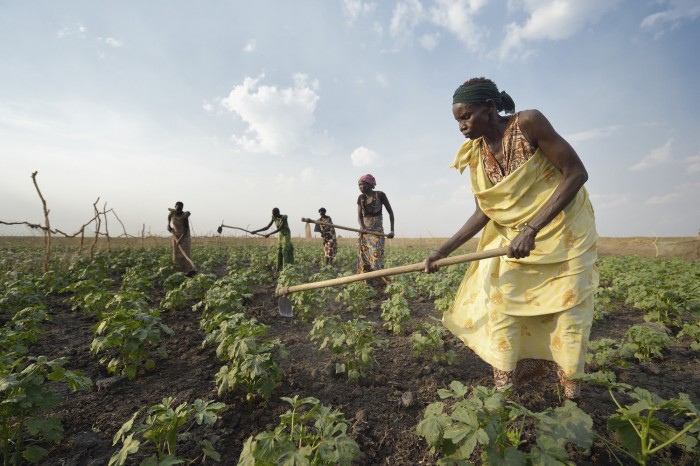 Adhieu Deng Ngewei and other women work together on April 12, 2017, in a community vegetable garden in Dong Boma, a Dinka village in South Sudan’s Jonglei State.  Credit: Paul Jeffrey

Dong Boma, South Sudan – When the war reached her village in early 2014, Adhieu Deng and her husband grabbed their seven children and headed for several islands in the middle of the White Nile River. The treacherous currents and featureless swamps around the islands have long provided cover for displaced families hiding from men with guns. And Deng and her husband knew how to get there. After being displaced by another war in 1991, they hid in the islands until returning home in 2003.

When political conflict once again broke out, beginning in Juba in December 2013, it quickly spread to several other parts of South Sudan. As the violence closed in on her village in Jonglei State, Deng knew where to go.

“When the fighting moved near to us, the roads were closed and the food supply was cut off. People were getting hungry and the rebels were passing close by. If we didn’t want to die of hunger or bullets, we had to leave. Some of my neighbours left for Kenya or Uganda, but I know the islands better than other countries, so we headed for the river,” she said. 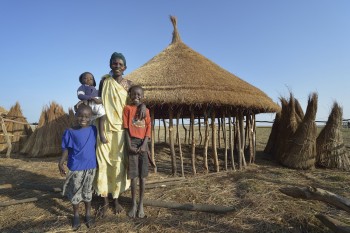 Adhieu Deng Ngewei and three of her children pose in front of their new hut on April 12, 2017, in Dong Boma, a Dinka village in South Sudan’s Jonglei State.

Life on the islands was hard. “We survived on fish and wild foods. If you didn’t catch any fish, you usually spent the entire day without food. The children sometimes went to sleep without food. It wasn’t easy hiding there, but no one could reach there to kill us. We had no mosquito nets nor shelters, so we slept in the open and the children were sick a lot. There were no medicines or doctors. No NGOs came to the islands,” she said.

“After a while, the fishing nets were so torn they wouldn’t work. Without any food, we either had to return home or die there. We decided to come back home. It was the right choice because the ACT Alliance has helped us rebuild our community.”

Since the family returned to Dong Boma in 2016 to find their house in ashes, Deng has had to construct a new home. She’s done that with help from the Lutheran World Federation, one of the several members of the ACT Alliance working in South Sudan.

According to United Nations officials, more than 3.5 million South Sudanese are internally displaced or have fled to neighbouring countries as refugees in response to the current conflict.

Yet in some locations, as fighting has ebbed and flowed into other areas, a few of the displaced, like Deng, have cautiously returned home. In Dong Boma, the ACT Alliance has helped the returnees rebuild houses, drill wells, patch holes in a dike that keeps the village dry during seasonal floods and support a group of women–including Deng–who organised a giant community garden.

As the community rebuilds, Deng hopes she won’t have to flee again. “Over the years we’ve had too many wars, too many cattle raids. There’s always some kind of fighting going on. I’d love to live in peace,” she said.