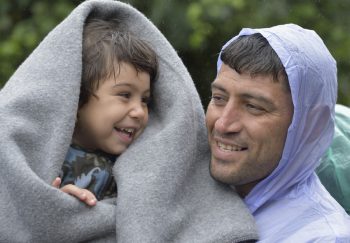 Refugees on their way to western Europe, a man from Iran holds his son as they approach the border into Croatia near the Serbian village of Berkasovo.
The ACT Alliance has provided critical support for refugee and migrant families here and in other places along their journey. Photo: Paul Jeffrey/ACT

This weekend’s announcement that the US will take no further part in the process for agreeing on a UN Global Compact for safe, orderly and regular migration is of great concern to all migrants and those who work with and for them, including the members of ACT Alliance worldwide. The US announcement came only hours ahead of a major international Migration conference being held by the UN in Puerto Vallarta Mexico, which is taking stock of a detailed consultation process around the world, which has been gathering inputs for the text of the Compact, and in which many civil society organsiations, including ACT and its members, have been actively involved.

The Compact presents a once in a lifetime opportunity for the global community to unite to protect the rights of people on the move. Not without its own challenges, the Compact process has been underway since September 2016, triggered by the New York Declaration, which was hailed as a watershed moment, having been unanimously passed by the UN General Assembly. The US government at the time was one of the key states backing the declaration.

ACT Alliance’s support for the Global Compact process has been resolute from the outset. ACT recognizes the importance of such a compact in the protection of peoples’ rights. There is a need to safeguard the rights of people on the move. A multilateral process under the auspices of the UN is indispensable for ensuring this. The US assertion that, “the declaration contains numerous provisions that are inconsistent with US immigration and refugee policies and the Trump administration’s immigration principles” stands in sharp contrast with the prevailing, global consensus on the need to reach an international agreement on migration policy.

In addition, from the outset the Compact was never intended to infringe upon member states’ national sovereignty. Instead, it has been an attempt by the UN to develop a global understanding about the rights of people on the move, whose numbers will likely continue to increase due to unresolved conflicts, as well as the growing socio-economic interdependence between nation states, and that efforts need to be made to regularize movement, while simultaneously acknowledging the sovereignty of states, as well as the interdependence between them.

We are dismayed at the Trump administration’s decision, we also recognize that it runs counter to the continued goodwill and support of people for migrants and refugees globally, and also within the United States. In a similar way as happened after the US announced its intention to withdraw from the Paris Climate Agreement, when many US cities remained committed to act on climate change, we are confident that the heartfelt and passionate work of the people, including our US members, at state, district and local levels will be able to maintain the much-needed support for migrants and refugees.

We urge the US administration to reconsider its decision, and constructively engage on the issues of migration by returning to the multilateral process. Migration is a global phenomenon which requires a global response. Like all countries, the US is not immune to the global forces that drive human migration. We call on all governments engaged in the Compact to not be distracted by the US withdrawal, but instead to redouble their efforts to address this critical issue.

We are also encouraged by the positive spirit of the discussions taking place in Puerto Vallarta at the moment, and we therefore urge the international community to carry on in its determination to find human rights-based, long-term and sustainable solutions to address the plight of people on the move. In this effort of collaboration, we also support the Statement from US Civil Society Participants during the UN Stocktaking Meeting on the Global Compact for Migration.