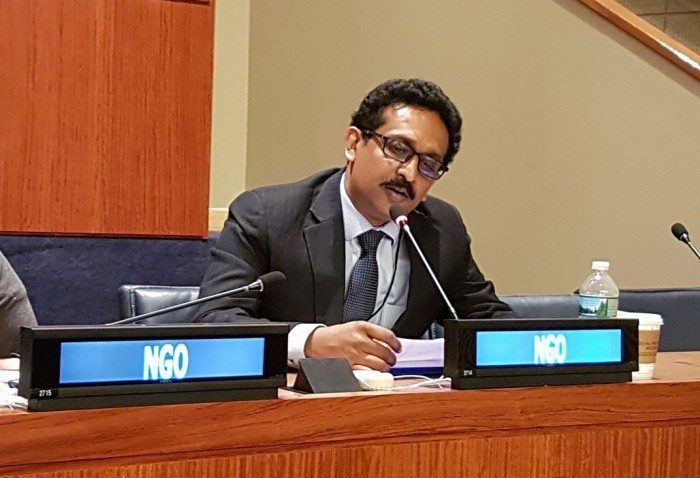 The International Council of Voluntary Agencies (ICVA) held its 17th General Assembly on 21 March, 2018. At the General Assembly ACT Alliance, represented by Anoop Sukumaran was elected to the governing body. Anoop who is ACT’s Regional Representative for the Asia/Pacific region was also elected by the General Assembly as the Chair of the ICVA Board for a three-year term. The Chair of the Board carries the responsibility for maintaining the humanitarian identity and integrity of ICVA’s mission and to ensure that the Board functions effectively. ACT member Christian Aid was also elected to the Board, represented by Jane Backhurst, Senior Advisor on Humanitarian Policy and Advocacy.

Established in 1962, ICVA is one of the oldest networks of NGOs advocating for a rights-and-needs- based approach for effective humanitarian action. Today, ICVA’S membership consists of over 100 organizations, including ACT Alliance, who are working together for increased coordination and collaboration between various humanitarian actors and NGOs.

“ACT is a leading voice and actor in the humanitarian space, and many of ACT’s members are members of ICVA. This makes ICVA a natural partner for us, and ACT has been committed to the mission of ICVA” said Anoop.

The four cross-cutting areas of ICVA’s work are forced displacement, humanitarian partnerships, humanitarian financing, and humanitarian coordination. Each of these priority areas are in line with the work of ACT. Close collaboration with ICVA is indicative of ACT’s dedication to support and to strengthen the representation of Civil Society Organizations (CSOs) and the voices of people from the ground, especially during a time of shrinking CSO space.

“ICVA connects ACT’s work on the Grand Bargain, the Localization Agenda, WHS commitments as well as the Global Compacts that are currently being negotiated,” said Anoop. “Engaging at a deeper level with ICVA allows for us to further our work on these very important issues from a rights-based lens, and from a lens that ensures that communities remain at the center of our work,” he continued.

ICVA further connects ACT’s engagement with the Inter-Agency Standing Committee (IASC), which is the primary mechanism for inter-agency coordination of humanitarian assistance, as well as with the United Nations High Commissioner for Refugees, and other UN agencies. Through ICVA, ACT Alliance can continue to work to influence humanitarian policy and to contribute to more effective humanitarian action.