ACT Alliance has launched a $21.5 million USD appeal focused in five countries (Ukraine, Hungary, Poland, Romania, Slovakia) to support people displaced by the war in Ukraine.  Since the war began on Feb 24, 2022, over 4.4 million people have been displaced, with over 2.8 million becoming refugees in other countries and close to 2 million displaced within the borders of Ukraine itself. 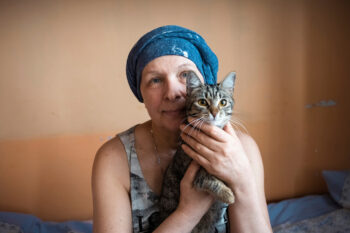 Larysa is one such person displaced by the war.  Larysa, her husband, daughter and the cat Bella escaped from Kharkov on March 1, 2022. Before fleeing, they spent four nights in the basement of their home due to the bombing of Kharkov.

“Everyone wanted to travel out of Kharkov. There were a lot of people at the train station. The train ride was free of charge, but getting on the train was difficult due to the crowds,” Larysa says. The trip to Berehove took four days.

Larysa and her family stayed in the refugee shelter supported by ACT member Hungarian Interchurch Aid, set up at a school. “We are happy to have a place to sleep and where it is warm. We get food three times a day, we can wash and do our laundry, because there is also a washing machine here.”

Larysa has cancer. She received treatment in Kharkov, but the hospital was destroyed in the bombings. Larysa hopes she could get treatment in Hungary.

As the intensity of the conflict escalates, more and more people have fled, and ACT members are providing shelter, food, water, hygiene kits, psychosocial support, information on resettlement, child safe spaces, and more.

The ACT appeal is the largest ever issued by the alliance, but ACT’s total response is significantly broader than the 2 year, 21.5 million dollar appeal.  ACT members are working to welcome refugees around the world, from Romania to Canada, from Germany to the UK. 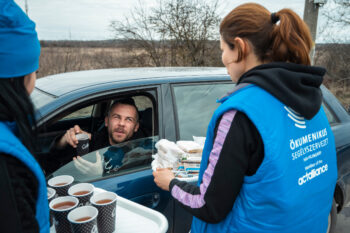 HIA provides relief to Ukrainians displaced by the war, in lines of vehicles that can stretch for kilometers from the border. Photo: Antti Yrjönen / FCA

HIA has set up operations in Lviv, with a warehouse there to support the distribution of food, hygiene kits, and other supplies.  HIA has shipped over 278 tons of supplies to Ukraine, as well as 7 million Euros worth of medical supplies.  HIA also operates a 24-hour refugee stop near the Hungarian border, as well as a child-safe space at the Budapest airport to support refugees transiting through Hungary to other destinations.

The Lutheran World Federation is mobilising churches in a number of countries, including in Poland, which has seen over 60% of the refugees crossing its borders, giving Poland one of the largest refugee populations in the world overnight.

Swiss Church Aid, the third member of the ACT appeal, is working with its long-term partners in Romania, Hungary and Ukraine to support displaced people through food, hygiene, cash vouchers, shelter, psychosocial support, and more.

Through the ACT appeal, cash transfers will be used where possible (when local markets are functioning) as one of the best ways to support people.  Cash is quickly transferred, allowing people to purchase what they need to support their families in their current needs.

ACT members have already pledged over $7 million USD in support of the appeal.  Further support can be indicated through email to Nancy Etté, ACT’s director of operations, and Niall O’Rourke, ACT’s head of humanitarian affairs.

Larysa says she hopes for peace in the future. “We would like to live in Kharkov again, but right now we can’t live there because there are bombings and people are dying. It is safe here (in Berehove). I am glad our children are alive.”