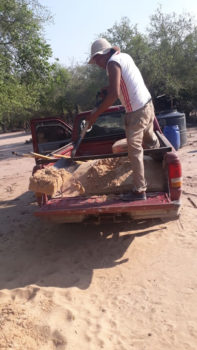 The ACT Argentina Forum is working to support Indigenous and other vulnerable communities facing the double crisis of ongoing droughts and COVID-19 through their “Access to water as a fundamental right for the full enjoyment of life” project.

The El Impenetrable area of ​​the Province of Chaco, Argentina, has suffered cycles of recurrent droughts and floods for the last 20 years. This year, the drought added to the emergence of the COVID-19 pandemic, and has made families of small farmers and indigenous communities in the area more vulnerable.

In a solidarity response to this situation, ACT Alliance Argentina Forum members and partners CREAS, SEDI, Hora de Obrar, and CWS joined to provide a rapid response fund to support to Junta Unida de Misiones (JUM)- an institution which has accompanied indigenous peoples in the area for more than 50 years, in an humanitarian project: “Access to water as a fundamental right for the full enjoyment of life.”

“Access to water is one of the most perverse forms of inequality and the consequence of a development model based on profit and lack of care for Creation. This joint initiative of the ACT Argentina Forum with the indigenous peoples in the Chaco is a concrete testimony of ecumenical diakonia in challenging times and a sign of hope,” emphasized Mara Luz Manzoni, Regional Director of CREAS.

“It seemed important to us to unite and accompany the JUM and the Chaco in the face of the seriousness of the situation of the drought and the fires. The best way was to create a rapid response fund to alleviate the situation. The sum of the contributions of each organization can have a concrete, rapid and accurate effect,” expressed Nicolás Rosenthal, executive director of the Hora de Obrar Foundation.

The project focuses on the construction and improvement of water infrastructures, both for human consumption and for agricultural and livestock use, as well as training in its construction and maintenance for rural community leaders in the municipalities of Castelli and Miraflores, Chaco. This initiative also seeks to reactivate the production of crops for families to both eat and sell. Both the drought and pandemic have impacted crop production, destabilizing food security for the population.

María del Pilar Cancelo, Executive Director of SEDI, an organisation invited to the ACT Argentina Forum, said, “The challenge of the Alliance is precisely the joint action of the churches, which makes it possible to join efforts and resources, to have greater impact, speed, and witness. This articulation between institutions is only a starting point, a challenge that we wish to sustain and enrich from this experience and the learning that arises”

For Martín Coria, CWS Regional Coordinator for Latin America and the Caribbean, “This collaboration can be replicated for the benefit of more faith-based organizations such as JUM that, throughout the region of the South American Gran Chaco, accompany the struggle of indigenous peoples for their land and for water, for their dignity and rights ”

According to the JUM, in recent years there has been an increase in the frequency of prolonged droughts in Chaco. The lack of rain causes the loss of plant production, forest fires, high mortality of animals, and also a sharp drop in sales due to social isolation. This leads to decreases in the nutritional and sanitary health of the population, accompanied by forced migration from the countryside to the city.

Raúl Romero, the JUM coordinator, said in relation to the project “The response and support of the ACT Argentina Forum have been critical to strengthening rural communities in the territory, who face the drought and the pandemic in the Impenetrable zone of the Chaco, where they did not have access to a resource as vital as water.”

Faced with this panorama, as the ACT Argentina Forum, we articulate in ecumenical cooperation with the JUM, which together with public organizations will strengthen this initiative to guarantee the right to water through education processes in relation to the care and rational use of water and maintenance of existing infrastructures.

In this way, it will seek to benefit more than 200 members of farming families and indigenous communities, in the targeted area, through the construction and repair of reservoirs, cleaning and deburring of dams, and repair of wells. The people who will benefit from the initiative will be small producers, informal workers an artisans, who have seen their production and marketing affected, as well as the population groups in risk in relation to COVID-19.