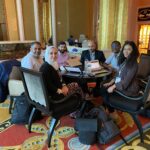 Panellists get ready for their MENA Climate Week side event on March 30. Photo: Julius Mbatia/ACT.

November’s COP27, the UNFCCC hosted the first ever climate week for the Middle East and North Africa (MENA) region from March 28 to 31. ACT Alliance organised a side event with Ummah for Earth, an alliance of environmental and Muslim agencies working to empower Muslim communities facing crises.

The panel agreed that to achieve effective climate action at the global level, COP27 and COP28 climate negotiations must include the most vulnerable communities across faiths, notably women and youth. “Climate change represents one of the most urgent global challenges we are facing today,” said Tarek Al Olaimi, ally of Ummah for Earth. “Youth and faith actors need to be brought to the decision table every day, in order to include them in sectoral planning, prioritisation, and policy frameworks.”

Panellists discussed the need for better coordination to achieve an overall transformation of societies at the economic and governmental levels. They pointed to the role of faith communities in filling the gaps between different sectors, organising, and responding to specific needs in planning and action. They also pointed to the challenges of working on climate justice in the region.

“We need to take a step back and take a snapshot of the MENA countries, specifically where armed conflict remains a living hell. We can’t expect conflict-affected communities to be aware of the climate hazard,” said Devar Sher (ally of ACT Alliance).

“I think what is needed are long term and clear projects upon which everyone can hop together and maintain,” said Dany El Obeid of the Middle East Council of Churches and ACT Alliance. “Maybe we can chop down the overwhelming task of combating climate change by taking smaller steps.”