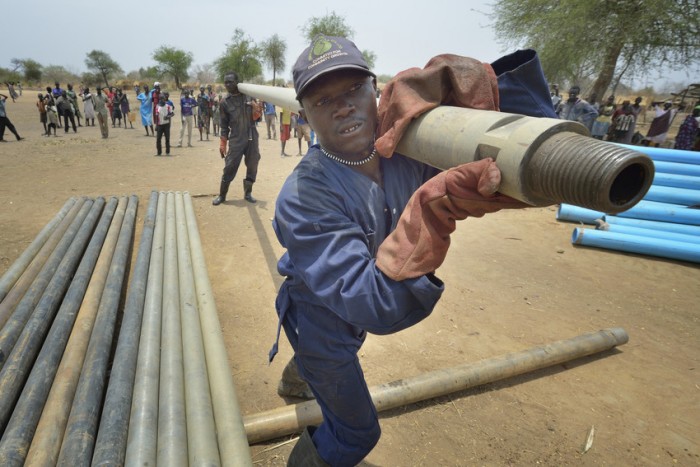 Workers carry pipe as they drill a well on April 7, 2017, in Rumading, a village in South Sudan’s Lol State where more than 5,000 people, displaced by drought and conflict, remain in limbo. ACT Alliance is carrying out the emergency assistance in coordination with government officials and the local Catholic parish. South Sudan. Photo: Paul Jeffrey/ACT

As the international community gathers in Cancun, Mexico for the Global Platform for Disaster Risk Reduction, ACT Alliance calls for the reduction of vulnerabilities and an increased focus on the human rights and dignity of people currently facing significant risks as a result of different types of catastrophes.

“Communities and people in all the corners of the world that are daily facing disasters as a result of the impacts of climate and other threats should be at the center of the Cancun discussion; we want to see their resilience as the highest priority,” said John Nduna, ACT Alliance’s General Secretary.

At the Cancun conference, ACT Alliance is showcasing best practices from the work of its members in communities and calling for the realities of people to be prioritized in the implementation of the Sendai Framework for Disaster Risk Reduction, which guides global policy and action.

The Global Platform is the main forum at the global level for strategic advice, coordination, partnership development and the review of progress in the implementation of international instruments on disaster risk reduction. It was established in 2006 and is now the world’s foremost gathering of stakeholders committed to reducing disaster risk and building the resilience of communities and nations. The Global Platform holds biennial sessions. The current Global Platform marks the first platform since the adoption of the Sendai Framework for DRR.

“ACT Alliance calls upon governments and all stakeholders to identify and address vulnerabilities by increasing investments towards building resilience,” said Jeroen Jurriens, the leader of the ACT community of practice on disaster risk reduction, and also the head of the ACT Alliance delegation at the Cancun conference.

“Furthermore, ACT Alliance calls for the recognition of the synergy between the implementation of the Sendai Framework for DRR, the Paris Climate Agreement, and the Sustainable Development Goals. In the reality of people’s lives disasters, climate change and poverty do not come as separate events,” said Jurriens.

“Stakeholders should recognize the value of empowerment and enhancing social capital. In the process of implementing the Sendai Framework, ACT Alliance also calls on the various stakeholders to recognize the key role that faith-based organizations can play in risk prevention and reduction, preparedness and humanitarian action,” added Nduna, General Secretary of the ACT Alliance.