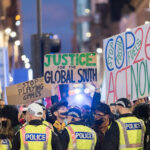 Funding for climate change losses in the Global South is often seen as charity, not justice. Photo: Albin Hillert/LWF

Members of ACT Alliance Canada recently hosted a virtual consultation exploring both the results of COP26 and the impacts of the climate crisis as they affect Eastern and Southern Africa. The consultations were a collaboration between agencies and ACT members in Canada and with ACT members and forums in the region.

Structured as moderated discussions with experts followed by small group participant discussions, the intent was to look for new pathways to strengthen Canadian agencies’ collaborative work in the region, identify challenges and opportunities and share experiences.  As noted by one of the hosts, Guy Smagghe (Presbyterian World Service and Development), the consultation would “stay clear of the blah, blah, blah and identify what we have agency over.”

Panellists and moderators included ACT Alliance members from Eastern and Southern Africa, as well as members of Canadian Foodgrains Bank, Lutheran World Service and the All Africa Conference of Churches. The hosts, Canadian Lutheran World Relief, Presbyterian World Service and Development, the United Church of Canada, the Primate’s World Relief and Development Fund, World Renew and the World Alliance of Christian Communicators, are members of ACT Canada.

Day One: Naming the challenges

First day panellists were moderated by Jim Cornelius of Canadian Foodgrains Bank, and included Julius Mbatia (ACT Alliance Global Climate Justice Programme Manager), who began with the inequities facing Africans. “Africa has contributed 3.8% of the world’s greenhouse gasses,” he said. Yet today, 600 million Africans have no access to power. “That’s 48% of the continent, and this restrains economies.”  At COP26, financing for loss and damage from climate change was “pushed back several years,” said Mbatia. “We need to advance the conversation to give communities hope,” and support “locally-led initiatives, technical accompaniment and transformation at the local level, where it’s needed.”

Lillian W. Kantai (LWF World Service Kenya) pointed to humanitarian issues in the region: “There are millions of refugees,” she noted, creating a “burden for host countries that are already burdened economically.” Governance issues affect climate finance. “How much of the money reaches locally-led initiatives? From a human rights perspective, we must hold our governments accountable and hold locally led initiatives to account as well,” she said. Kantai also spoke eloquently of women’s unfair burden under the climate crisis.

“More impacts from climate change are coming,” said Paul Hagerman (Canadian Foodgrains Bank). Money needs to reach those most affected, and African people need to be heard on these issues. A further issue is that “donors in the north see climate finance as optional, as aid or charity,” said Hagerman. “Developing countries see it as a justice issue.” He added that more analysis of the impacts of climate change will allow those involved to plan improved adaptation projects.

Day two of the consultation was moderated by Elizabeth Kisiigha Zimba (ACT Alliance Regional Representative, Africa). Panellists began by describing the effects of the changing climate in their countries. “Cyclone Idai … killed people and displaced others from their homes. It impacted the economy and lives,” said Collins Shava (All Africa Conference of Churches). Melton Luhanga (ACT Malawi Forum and Churches Action for Relief and Development) added that changing rains and the increasing number of floods in Malawi mean that “food insecurity is now widespread in most areas.”

When asked to discuss opportunities for action and collaboration, Patriciah Roy Akullo (ACT Uganda Forum and ACT’s Climate Justice group) advocated putting youth “at the forefront” and collaborating with the private sector for solutions in research and innovation. The need for private sector engagement was echoed by some other panellists.

Philip Mato Galgallo (ACT Burundi Forum and Christian Aid Burundi) noted the “paradox” that when communities lose livelihoods suited to a past climate, they “may be pushed into industrial work that further destroys the environment.” As well, African countries “don’t lack policies, but do lack enforcement,” he said. “We can collaborate” to change this.

Collins Shava added that there is still room to push for commitments at future COPs, and to “push for our countries to take responsibility.” Building capacity in faith leaders remains important as “religion and faith are more influential than politics in my country” of Zimbabwe. He also advocated for promoting women in decision-making.

Melton Luhanga pointed to the consultation itself as an important example of collaboration. “What we are doing here is one of the greater opportunities. This is capacity-building,” he said. “Between and amongst us, there are appropriate technologies” that with adequate financing and promotion can solve the problems created by a changing climate.

In summarizing the two days of discussions, PWS&D’s Guy Smagghe began by noting that “our Earth is a temple that has become a marketplace. We need to bring it to another level.” He pointed to some key threads in the consultation, such as building consortia and encouraging effective youth involvement, and to issues that need more exploration, such as Indigenous knowledge and appropriate technologies. He noted that some of these issues can be brought to ACT Alliance.

“We are challenged,” Smagghe said, “to strengthen the livelihoods of people now facing climate change impacts that destroy their livelihoods.” Finally, he said “We need to digest the input of all who contributed during the last few days … This is just opening the door to trying to make a greater difference together.”