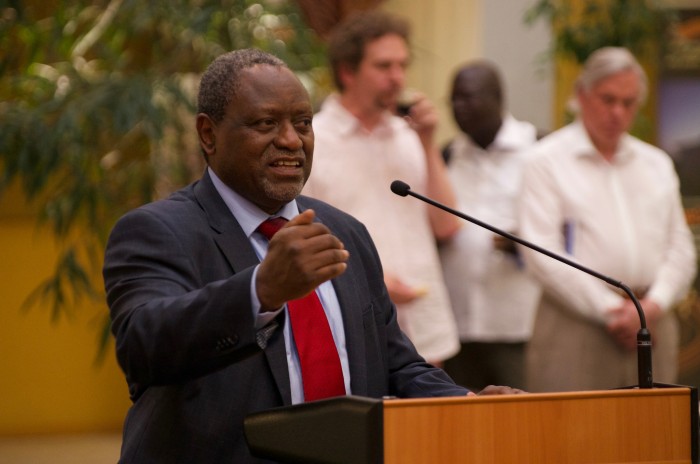 John Nduna reflects on the importance of ecumenism and the ACT Alliance during celebrations of his retirement. Photo: Simon Chambers

Ecumenical leaders, ACT secretariat staff, WCC and LWF leaders, the ACT governing board and others gathered in Geneva yesterday to celebrate John Nduna’s work with first ACT International and then as General Secretary of ACT Alliance since its founding.

John was praised for his ecumenical approach, his ability to lead in difficult times, and for the vision with which he crafted the ACT Alliance into one of the largest faith-based networks of humanitarian and sustainable development agencies.

John compared his time with ACT to a pilgrimage, a journey.  “The formation of ACT Alliance is one of the things the ecumenical family has done a good job of,” he said to those gathered.  “To address the suffering of the people out of war, natural disasters, those who are marginalized.  ACT has worked with so many people in so many places, but difficult places.  We always go to the hardest to reach places.  The staff of the members of ACT have been unrelenting to assure that we provide whatever assistance or programs are needed.” 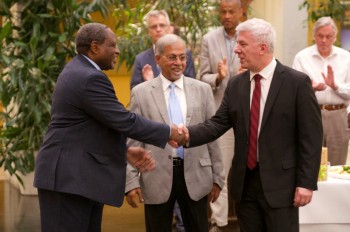 “I sincerely believe in ecumenism,” he continued.  “Working with WCC, LWF, and other sister church organizations has been a pleasant experience for me.  I would like to say ‘continue with the cooperation that is ongoing among all sister organizations.’”John’s successor, Rudelmar Bueno de Fario, begins his role as General Secretary today.  “I said to Rudelmar, ‘the door is open,” John said.  Then he continued jokingly, “But he was quick to say in the meeting this morning, ‘Yes, John opened the door.  I can call him any time.  But yesterday he changed his telephone number!’  But Rudelmar, you can rest assured that the old telephone number is still working.”

ACT wishes John all blessings as he moves on to the next phase of his life, and welcomes Rudelmar into his new role.