ACT elects a new governing board membership and nomination committee 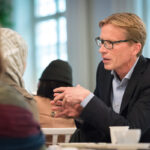 Erik Lysén, seen here during the ACT Assembly in Uppsala Sweden, was elected as the new moderator of the ACT Alliance Governing Board. Photo: Albin Hillert/WCC

At its closing plenary on December 3, the ACT Electronic General Assembly elected its new governing board, the officers of the board, and the membership and nominations committee (MNC).

Officers, members of the board, and of the MNC must demonstrate active engagement in the life of the Alliance prior to being nominated for the positions. The elected individuals will serve for a period of three years, until the next Assembly in 2024.

ACT’s governing board is made up of 22 members representing the various regions, as well as two seats for youth.  Congratulations to the newly elected board, and a warm thank you to all who put their names forward for these roles. Here is the new board:

The officers of the board are the Moderator, Vice-moderator, and Treasurer.  Erik Lysén, from Act Church of Sweden, was elected as the new moderator.

Lysén serves as the Director of International Affairs with Act Church of Sweden, and has been involved in ecumenical justice work for over 30 years, beginning his work in 1991 in South Africa, and said, “the lasting memory of that time is one of being together in a global struggle to combat racism, ending apartheid. It holds similarities with our mission today. We’re in the alliance because we have a common cause, a global faith-based struggle for climate justice and social justice.”

Lysén went on to say, “I am proud to moderate an alliance that embodies commitments to sustainable development, multilateral cooperation, respect for democracy and human rights, peace, dignity, and equality – a global coalition of actors that work together to contribute to a just, inclusive, and peaceful world. A church-based alliance with its roots in faith-based communities at the local level. An alliance that puts Christian faith and hope into action.”

Lysén picked up on the importance of youth to the Assembly and to the life of the alliance. “This general assembly has shown that we can be proud of our youth COP and their expertise, not only on climate change, but also on all the conversations we’ve had during this week… We’re on the way to building a strong youth movement, but will only do it through your experiences, advice, and competence.”

“The value of ACT Alliance members working together is so much more than members acting alone”, he concluded.  “So, let us be brave and see the light. Let us put faith and hope into action. Let us be the change ourselves!” The full text of his speech can be found here.

Erik Lysén will work with Minnie Anne Mata-Calub, from the National Council of Churches in the Philippines as Vice-moderator, and Simangaliso Hove, Lutheran Development Service in Zimbabwe, will serve a second term as treasurer.

The Membership and Nominations Committee will be composed of:

One seat will remain vacant for the moment until a process for filling it is agreed to.