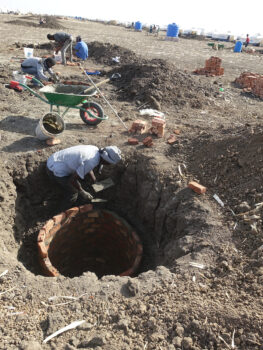 Refugees in Sudan, fleeing from the Tigray region of Ethiopia, are paid to help build 3.5m latrines in the Tuneybah refugee camp as part of NCA’s work in the joint ACT/Caritas response to the crisis. Photo: Iker Muntes-Burgos/NCA

The ACT Europe Forum released a statement at its annual meeting on May 12, calling on the EU and European governments to maintain their Official Development Assistance commitments. The forum is deeply concerned about the multiple crises triggered or exacerbated by the war in Ukraine and their impacts on other countries, especially in the Global South.

The forum has been heavily engaged in responding to the Ukraine crisis through humanitarian response and advocacy. Its members are also responding to crises in countries including Ethiopia, Syria, and Yemen, and to the growing drought and potential famine in the Horn of Africa.

The ACT Europe Forum is concerned by the decisions by several European governments to move ODA funding- previously committed to long-term development assistance and humanitarian efforts across the globe– to receive Ukrainian refugees in Europe.

The forum stands united in asking the EU and European governments to retain previous commitments to ODA and to fund the necessary reception of Ukrainian refugees from other sources.

“We are deeply concerned about the multiple crises facing the most vulnerable people in the world today,” the statement reads. “Conflict, Covid-19 and the climate crisis have pushed more people into poverty, food insecurity and displacement. The number of people in need of humanitarian aid is rapidly increasing.”

ACT’s European members are “very worried about a number of European countries that have reduced their development aid funding to countries and groups affected by poverty, or are planning to do so,” noting that “these political actions are weakening trust in international commitments, and weakening the critical fight against poverty and the realisation of the Sustainable Development Goals.”

The Forum urges the EU and its member governments “to keep up the ambitions and meet the targets they have set for humanitarian and development funding.”

Dagfinn Høybråten, the Secretary General of Norwegian Church Aid and chair of the Europe Forum, highlighted that “it is our moral obligation to stand with our brothers and sisters wherever they are and regardless of how that might benefit ourselves. Our message is quite simple: Do Ukraine well, without dropping the ball on other crises.”