ACT joins WCC delegation to Syria, expressing solidarity with those who “remain steadfast in their land” 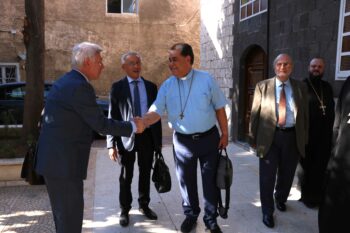 ACT’s general secretary, Rudelmar Bueno de Faria joined a delegation from the World Council of Churches (WCC) visited Syria for the first time since 2008, expressing solidarity with Christians and with all people facing the struggle for a presence and witness in their land.

They met with heads of WCC and ACT member MECC member churches, and visited restored churches and schools as well as development projects and community and health centres in Old Aleppo and in Damascus.

After the visit, Bueno de Faria said, “After 11 years of war, the Syria crisis is characterized by unparalleled suffering and humanitarian needs. Economic distress caused by the sanctions is affecting ordinary people, especially youth and the elderly.“

He added, “Churches and church-related organizations are providing humanitarian assistance, but urgent political decisions and actions are needed to revert the suffering of the Syrian people. Human dignity needs to be restored in Syria.”

Sauca said the WCC stood in solidarity with Christians in Syria and in the whole region as they struggle continuously to keep a living faith in the midst of unprecedented challenges that threaten their presence and witness. “There should be an ecumenical effort to support them in their steadfastness,” said Sauca. “One of the major challenges particularly felt by Christians in Syria is that being fewer in number makes them more vulnerable than other communities in facing common challenges in their societies.” 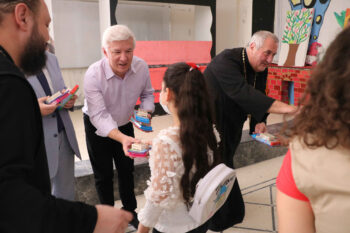 Young people are migrating to look for a better future abroad, said Sauca, a tide that churches and humanitarian groups could help turn around. “Christians in Syria have developed institutions that specialise in humanitarian and development fields that are serving all people without any discrimination,” he said. “In addition to the schools, medical, health and community centres, psycho-social services are provided, and small businesses are supported.”

The delegation also saw that many destroyed churches and schools have been rebuilt. “This contributes to encourage people to remain steadfast in their land,” said Sauca.

Dr Michel Abs, secretary general of the Middle East Council of Churches, stressed “the need for a meeting between spiritual leaders at the local, diocesan and pastoral levels, aiming at increasing the level of interaction between churches and coordinating their activities.“

This story is based on the WCC’s release here: https://www.oikoumene.org/news/wcc-delegation-visits-syria-expresses-solidarity-with-those-who-remain-steadfast-in-their-land.