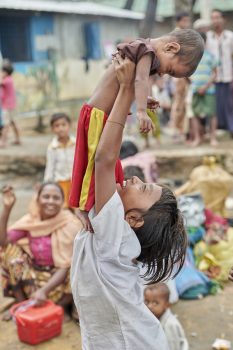 A Rohingya girl, having just crossed the border from Myanmar, lifts her sibling in the Kutupalong Refugee Camp near Cox’s Bazar, Bangladesh, where members of the ACT Alliance provide humanitarian support for the refugees.
More than 600,000 Rohingya have fled government-sanctioned violence in Myanmar for safety in Bangladesh.
Parental consent obtained. Photo: Paul Jeffrey

Anoop Sukumaran, ACT’s Regional Representative for Asia and the Pacific, wrote to ACT members in the region about the new agreement with UNICEF:

“United by our common desire and belief that all children have a right to survive, thrive and fulfill their potential, UNICEF and ACT Alliance are delighted to announce the formation of an institutional partnership to work more closely together with faith leaders, actors and faith communities in our joint goal of ensuring that children’s rights are achieved globally.

“The common purpose of this partnership is to collaborate in agreed joint projects at global, regional and national levels, to mobilise stronger, more effective, evidence-based and rights-based engagement, advocacy and action between both organisations and the communities they seek to assist.

“For ACT Alliance, the rights of children need to be upheld in all aspects of our work —humanitarian, development and advocacy.  A partnership with UNICEF will make it possible for ACT members to be an even stronger voice at the national, regional and global levels, championing the rights of children in all we do.

“UNICEF firmly upholds that the 2030 Agenda for Sustainable Development is about the future of both people and planet. Both are under severe threat. In some cases that is because of actions committed and in others because of what has been omitted. Faith-based organizations and actors are at the centre of humanity’s actions and reactions and together with country leadership, the ACT partnership can bring change on the ground for children and their families.

“We hope this would pave the way for increase collaboration between the organisations.”

Read the letter signed by UNICEF and ACT here. 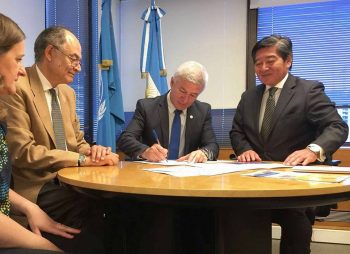 CREAS, an ACT member based in Argentina, signed the MoU with the UNDP’s Argentina office.   The purpose of this memorandum is to highlight the contribution of FBOs in the implementation of the 2030 Agenda and the achievement of the Sustainable Development Goals.

UNDP Argentina, the National Council of Coordination of Social Policies (CNCPS), the Secretariat of Worship of the Ministry of Foreign Affairs and Worship and ACT Alliance forum members as well as other FBOs involved in these areas of work will share information, technical cooperation in preparing a report on the contribution of FBOs to the SDGs, and will promote this model in the framework of South-South cooperation with other countries.

For over a year now, members of the Latin American and Caribbean Interreligious Alliance for the 2030 Agenda have met with the World Bank and UNDP on “Ending extreme poverty: a moral and ethical imperative” and two high-level dialogues on “International Financial Architeture: Ethics and Economics” organised by regional and international FBOs, universities, the Development Bank for Latin America, UNDP and the Argentinian government.

ACT forums in Latin America will be encouraged by this collaboration model.  The close contact with UN agencies and active participation of ACT forums in the national mechanisms for the implementation of the 2030 Agenda will be of benefit to all involved.