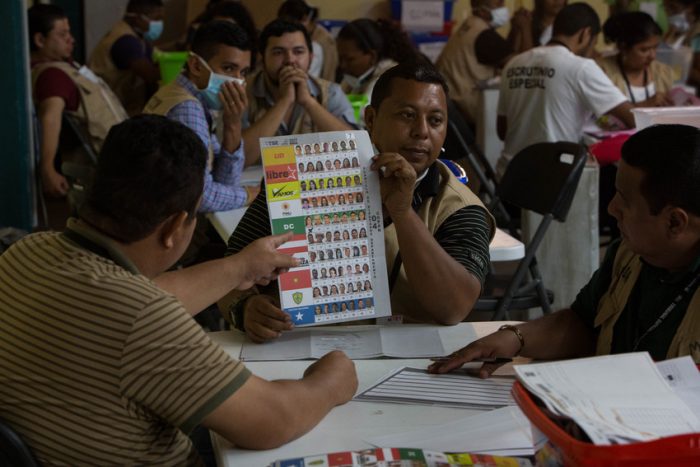 During a partial recount of votes in the Supreme Electoral Tribunal, TSE, workers counting are overseen by international observers. Many irregularities in the electoral process have been identified by the EU and EOA observer teams. A full recount has been requested. The elections were held on Nov 26 and there was no final declaration of results by Dec 13th. Credit: Sean Hawkey

After general elections were held in Honduras on November 26, 2017, election observers from the Organisation of American States noted that there were significant systemic inconsistencies and questioned the validity of the election.  This election was the first since the electoral college had changed the law to allow a president to seek re-election.  Early results showed a significant lead for challenger Salvador Nasralla, but several days later the Supreme Electoral Tribunal announced that President Hernandez, the incumbent, was in the lead.

Many people began to participate in daily demonstrations against the election process, taking to the streets to voice their opposition.  21 days after the election, the Supreme Electoral Tribunal announced Hernandez as the winner, despite the OAS’s call for new elections.  Many protestors were arrested as terrorists under the new penal code in Honduras, leading human rights groups to fear that abuses to rival those in the 1980s may soon occur again.  More than 30 killings have been called political assassinations since the protests began.

ACT Alliance shares the concerns of the OAS about democratic rights in Honduras, and calls for the protection of human rights.

Rudelmar Bueno de Faria, ACT Alliance’s General Secretary, said, “We cannot ignore the systematic problems of democratic institutional order and social inequality in Honduras, which are leading to violations of human rights and increasing violence in the country. The Honduran people should not be treated as terrorists when claiming their rights.”

The video below was compiled from footage shot during an ACT visit to Honduras as the protests continued, and shows the reality on the streets facing the people of Honduras.

“We call on the Honduran institutions to guarantee human rights and democracy, and promote sustainable solutions by legitimate and credible actions to respect the rule of law,” concluded de Faria.