“Culture.  Tradition.  Way of life.  Diets.  Their beliefs, their skills of when and how to fish, what to plant and when to harvest all depend on the surrounding environment that they have lived in for generations,” says Tafue Lusama, the General Secretary of the Church in Tuvalu of the people of his small island nation. 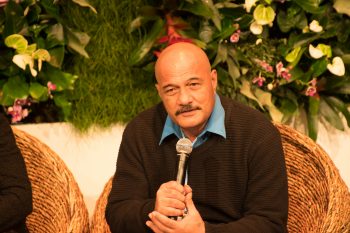 Reverend Tafue Lusama General-Secretary of the Church of Tuvalu speaks of the desperate situation faced by his small island nation in the face of rising sea levels and other climate-induced dangers. Photo: Simon Chambers/ACT

“Tuvaluans live out of the land and the sea for their daily sustenance… It seems like all their skills and techniques and knowledge that have sustained the people have been challenged by the impacts of climate change, the unpredictable weather patterns, the constant visit by, and increase in intensity and frequency of strong winds, cyclones, wave surges have put their survival skills to the test.”

The island nation is only 26 square kilometres of land, with an average elevation of 3-4m above sea level.  Tuvalu is in danger of disappearing altogether with rising sea levels, even beyond the increasing climate-impacted weather events Lusama spoke of.

He was speaking at a press conference hosted by ACT Alliance and ACT member Bread for the World at COP23, the International Climate Conference.  The event focused on non-economic loss and damage experienced by communities like those on Tuvalu and other Pacific island nations, but also by many millions of other people around the world.

“Extreme weather events are happening all over the world- from the drought in Africa to the flooding in Asia, from the hurricanes in the Caribbean to the sea level rise in the Pacific are forcing people to leave their homes, to look for water, food, shelter and safety,” said Rudelmar Bueno de Faria, ACT’s General Secretary.  “At this COP, we know that the Parties are pulling back from the spirit of the Paris Agreement, especially from the financial commitment to it.  We cannot afford to back away from these commitments.  On the contrary, we need to strengthen and support them as much as we can.”

Frances Namoumou from the Pacific Conference of Churches spoke of accompanying the first village in Fiji who had to be relocated because of climate change. “For us in Fiji, the vanua, it’s an extension of us as human beings to the land and the ocean,” she said.  Moving a village because its land was lost to sea level rise and constant flooding during storms was a difficult decision.  45 communities in Fiji have now been identified as needing relocation, with another 800 in imminent danger.  “For us in the Pacific, we release the least amount of carbon emissions, yet we are in the front line in terms of facing climate change issues.”

Cornelia Füllkrug-Weitzel, President of Bread for the World, launched a discussion paper on Non-Economic Loss and Damage during the event, which shares stories from Tanzania, Ethiopia, El Salvador and Bangladesh.  “A solution to deal with economic and non-economic consequences of climate induced migration and relocation is very, very urgent,” she said. Non-economic loss and damages have not been discussed much to date, she said. The loss of lives, land, territory, language and culture can’t be valued in monetary terms.

“Climate change has an impact on the whole dimension of our lives,” Bueno de Faria concluded.  “That is why we need to act now to change the inequalities in the world today.  If we will not do that, then we are completely lost.”