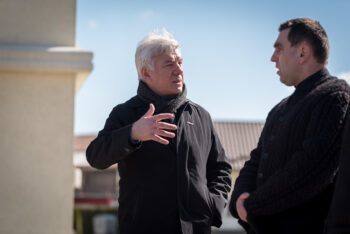 ACT Alliance and the World Council of Churches undertook a solidarity visit to Ukraine, Hungary and Poland the week of March 14-18, 2022.  On this trip, they met with church leaders and humanitarian actors, visited refugee and internally displaced people support points, and saw first-hand the impact that the ongoing Ukraine war is having on the people fleeing for refuge.

Rudelmar Bueno de Faria, ACT Alliance’s general secretary, said, “ACT Alliance decided to travel to the border countries of Ukraine with  with the World Council of Churches leadership, as a way to show solidarity to our members and the people who are affected by the war. Through this visit, we confirmed the distinctive role faith-based organizations play in the humanitarian response, where ACT members and churches are working together to alleviate the suffering of the people who have lost everything in the conflict.

“Ours was a concrete way to show the support of the Alliance but it was also important to counter the dissemination of misinformation and news that are used politically on social media.”

From the second day of the war, ACT members and churches have been helping those displaced by the conflict. “The churches have mobilized their constituencies and a great number of volunteers to welcome Ukrainians at border crossings providing psychological and spiritual support and all necessary immediate assistance and shelter,” said Bueno de Faria.  “ACT members have been helping immensely those affected, including providing immediate humanitarian assistance, legal assistance for people looking for asylum, information and support for those looking for safe pathways to reach other destinations.” 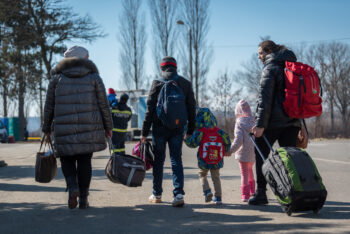 Thorsten Göbel, ACT’s director of programmes, was impressed with the response by ACT members. “What impressed me most was the combination of different approaches to respond to the specific needs in the respective situations: from larger quite professionalised response inside Ukraine combined with domestic response in Hungary by Hungarian Interchurch Aid, to a more regional parish-based response by HEKS, the Reformed Diakonia, and the Orthodox church in Northwestern Romanian combined with cross-border cooperation with the churches around 100km across the border on the Ukrainian side, and a well-connected response and a focus on legal assistance by Aidrom with local authorities and other civil society actors in Northeastern Romania.”

“As the crisis continues and enters a new phase, both the IDPs in Ukraine, and the people who are settling in neighbouring countries and the rest of Europe will most probably need material assistance that is mainly based on cash transfers, especially where there are functioning markets – to allow freedom of choice and to safeguard dignity of people affected.” In addition, they will need information on travel, accommodation options, and spiritual and psychosocial support.

Bueno de Faria highlighted the risks faced by women and girls displaced by the war, which include human trafficking and forced labour. “This is a concern that many governments and UN agencies are aware of, but I believe that we need to do more to ensure that women and children find safe pathways and to support protection structures.  The approach is not the same in the different countries receiving refugees.  A gendered response is critical in this specific situation, as most of the refugees are women leaving Ukraine with their children, and elderly people. Most men stayed behind, as they cannot leave the country if they are between 18 and 60 years old.” 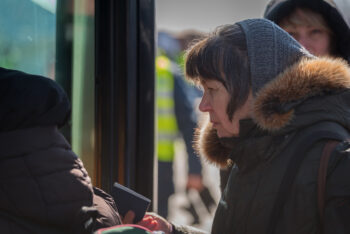 Churches play a key role in responding to this crisis, Bueno de Faria said. “Church leaders are mobilizing great numbers of volunteers.  They are also aware of the political nuances around this war, which is an important element of the political and prophetic diakonia, where church leaders stand up to denounce injustices and announce the good news. I sincerely believe that after this war, the role of ecumenical diakonia will be more important than ever, where- regardless of their individual Christian confession- they will realize that we need to work together to ensure more inclusiveness, solidarity and justice in human relations.”

Göbel shared concrete actions that ACT members and supporters can take at this time. “Pray for and with the people from Ukraine and Russia for an immediate cessation of the violence, support the ACT members that are directly responding through the ACT appeal for a coordinated response, and maintain your long-term commitment to support this response along with other crisis situations that must not be forgotten.”