Ahead of G7 Environment Ministers Meeting, Christian groups call upon the US and other governments to care for the creation 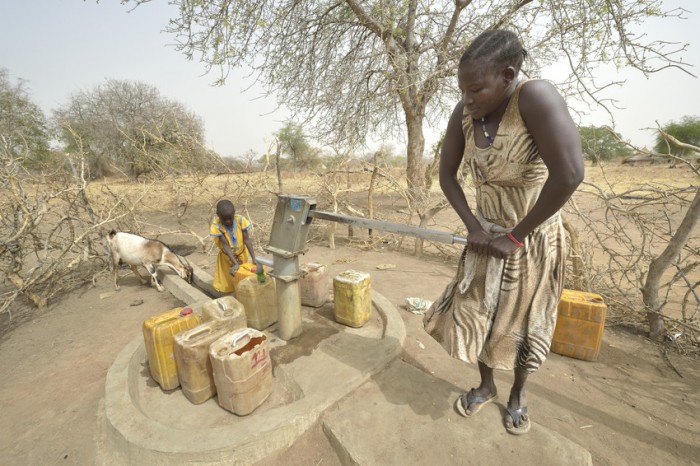 In Malek Miir, a village in South Sudan’s Lol State, where persistent drought has destroyed crops and left people hungry, a well provides much-needed water to a mother and her daughter. Persistent drought and other climate-linked disasters are growing more regular and severe. Photo: Paul Jeffrey/ACT

BOLOGNA, Italy. On Friday the 9th of June, Christian, Jewish, Muslim, Hindu and Buddhist leaders will meet for an Interfaith Forum on Environmental Protection, with an aim to agree on a Charter of Values and Actions, to be delivered to the ministers attending the G7 Environment Ministers Meeting on the 11th  – 12th of June.

Climate change is an important topic for many religions. This was stressed in a global statement made by more than 150 faith and spiritual leaders in the run up to the Paris climate summit in 2015.

“Many religions share a belief that humanity has an important task, to care for creation. However, when we look around us today, we are concerned. Our current way of living is not sustainable. We must change our way of living and enter a new and sustainable development path,” says Mattias Söderberg, representing the ACT Alliance in the Forum.

Éamonn Meehan, President of Coopération Internationale pour le Développement et la Solidarité (CIDSE), says, “Those most affected by climate change are those who have done the least to contribute to it, which is an inherent injustice. There is a moral imperative for G7 countries to recognise and take responsibility for the global damage they have caused through their carbon emissions. Climate change is the most pressing issue of our time and if world leaders, including the U.S. don’t begin to care for creation and see that the Earth is for all, then there will be little left for future generations to enjoy.”

Cecilia Dall’Oglio, representing the Global Catholic Climate Movement (GGCM) at the Forum, comments, “Christians worldwide are responding by coming together in unity to care for creation in prayer and action as announced on the occasion of World Environment Day. A new wave of climate action during the new edition of the Season of Creation will be running from September 1 to October 4, uniting the 2.2 billion members of the Christian family to care for creation. Besides local action in grassroots communities, Christians will also engage in advocacy initiatives such as a new Joint Christian Divestment Announcement on October 4.” To date, 27 Catholic institutions have already divested from fossil fuels. The convening organizations who are leading the Season of Creation promotion efforts are: World Council of Churches, Anglican Communion Environmental Network, Pope’s Worldwide Prayer Network (Apostleship of Prayer), the Global Catholic Climate Movement, and ACT Alliance.

The G7 Meeting is a major international event, especially for the new head of the US Environmental Protection Agency, Scott Pruitt, who can expect a lot of critique following the US decision to withdraw from the Paris Agreement.

Faith representatives, preparing for the Interfaith Forum, express their deep concern about the US decision. “To care for creation, is a moral and ethical responsibility. We cannot treat creation with disrespect, and we must develop a sustainable way of living. I therefore call on the US to reconsider the decision to leave the Paris Agreement,” says Mattias Söderberg.

He continues, “I welcome how most world leaders, including six of the G7 countries, as well as cities, states and corporations in the US, have reconfirmed their commitments to take action on the Paris Agreement.”