An anniversary of an earthquake overshadowed by COVID-19 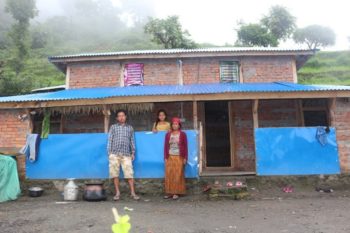 In 2015, a massive 7.8 magnitude earthquake struck Nepal. ACT Alliance-member Lutheran World Relief (LWR) together with other ACT Nepal Forum members supported affected people like Sunita, a mother of four whose husband worked abroad during the earthquake. The community resilience increased five years ago now helps them also through the Corona-crisis.

On 25th April 2015, in a matter of a minute, Sunita’s house was turned into rubble by the devastating earthquake. When it hit, Sunita was around 20 minutes away from her home in Gorkha district, a hilly region in Central Nepal which was the epicentre of the earthquake.

Hard for children, women and the elderly

After returning home, Sunita was relieved to find that everyone in the family was safe. However, like over 600’000 other houses in the country, the family’s house had collapsed during the earthquake and aftershocks. “I was disappointed when I didn’t find anything in my completely damaged house. There were no clothes, bedding, food, not a single thing found in the rubble was usable”, says Sunita. Soon she realized how miserable the condition of her family was.

Other infrastructure was also destroyed or disturbed in the earthquake-affected districts. Sunita’s village was without food, electricity, water, road connectivity, sanitation, supply chain or communication. Sunita and her children, along with millions of other families in Nepal who had lost their houses or felt insecure due to the aftershocks, slept outside. “As I had no food and no utensils, I was not able to cook for a few days,” remembers Sunita. Rain and wind, along with continuous aftershocks, further aggravated the situation, which was hard especially for children, women, and elderly people.

Five ACT Alliance members were involved in the ACT-appeal issued after the earthquakes: DanChurchAid (DCA), Finn Church Aid (FCA), ICCO Cooperation, the Lutheran World Federation (LWF) and Lutheran World Relief (LWR). They were organized as the ACT Nepal Forum, working together from day one and meeting daily in the beginning. In the first four weeks following the disaster, they were engaged in life sustaining activities, distributing two-week food rations, non-food items, tarpaulins for emergency shelter, family water treatment and personal hygiene kits to over 42,000 of households. At the same time, they engaged in detailed assessments necessary for focusing the on-going response both geographically and sectorally. Christian Aid (CA), Felm and the Nepal Evangelical Lutheran Church (NELC) who joined the ACT Alliance respectively its Nepal forum at a later stage supported the appeal as well.

Along with the relief supplies, the families in the area also received agricultural support– seeds, irrigation systems, tunnels, agriculture tools and livestock inputs. People were also trained in improving their agricultural practices.

The program prioritized community participation and mobilization. For the agricultural support, the local government and communities implemented joint actions which not only helped to mobilize the communities, but also increased social harmony. A study showed that through the livelihood intervention families ensured food sufficiency for an average of two additional months per year. Likewise, the livestock provided through the project helped to increase their food security by a further month.

Sunita’s family immediately received food for 15 days as well as non-food items from LWR. Later on, with the help of local masons trained for the project, they could move to a permanent shelter with earthquake resistant features and were provided an individual toilet. The toilets also have earthquake-resistant features with a bathing space inside. That’s particularly important for women and girls. “We have our privacy now”, states Sunita.

Women were given priority. Partner organizations assured that a minimum of 40% of the program participants were women. Their participation helped to generate income as well as foster social identity, thereby increasing the women’s self-esteem and self-confidence. Tools were developed to measure not only the number of women who benefited through the intervention in general, but also the role of women in social institutions like farmers groups as well as in cooperatives supported and promoted by the program.

Nobody affected by COVID-19 yet

Sunita’s family has a better life than before the quake. They have an earthquake-resilient shelter which is safer than the previous one. By constructing toilets with bathing spaces, awareness for health and hygiene was increased in the village and led to a safer and more hygienic lifestyle. Also, the input and knowledge received in improved agriculture practices have helped to increase productivity.

Of course, Sunita and her family have been affected by COVID-19 like everybody. They are staying in their village and have restricted access to outside communities. Sunita reports: “My husband and I are working in maize farming, and the school-aged children are helping us and assisting in household chores and in the fields.” She further says: “Fortunately, there is nobody affected by the disease in our village and we are supposed to be safe. There is less trouble than in urban areas. Everybody is busy in farming and caring for domestic animals.”

All of today’s ACT Alliance Nepal Forum members CA, DCA, FCA, Felm, ICCO, LWF, LWR and NELC had a permanent presence in Nepal before the earthquake and benefitted from substantial experience in development and humanitarian programming in the country, both directly implemented by them and by Nepali partner organizations.

The completion date of the second Nepal appeal (NPL161) was 31 October 2017. LWR ended its activities on 30 April 2017. Like all the ACT members involved, the organization continues its work in Nepal in times of COVID-19.