Building bridges in a time of human rights backlash 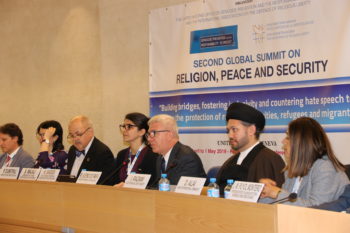 The Second Global Summit on Religion Peace and Security: Building bridges, fostering inclusivity and countering hate speech to enhance the protection of religious minorities, refugees and migrants took place at the Palais des Nations in Geneva from April 29 – May 1, 2019.

The meeting was organised by the United Nations Office on Genocide Prevention and the Responsibility to Protect, and the International Association for the Defense of Religious Liberty (AIDLR).

It brought governments, practitioners and civil society together for a constructive dialogue on the rise of intolerance including xenophobia and discrimination and to find a common way forward to address these concerns.

At times when political radicalisation and backlash to freedom is growing in the public debate, a strong and unified position must be taken to protect the rights of minorities and those most marginalised.

Evidence suggests that hate crimes against religious minorities, refugees and migrants, are on the rise. This is especially true for those minority groups who have been depicted by conservative voices and groups across the world as a problem more than a vulnerable group in need of protection.

Rudelmar Bueno de Faria, ACT Alliance General Secretary was invited to intervene in a panel focusing on the rights of migrants, refugees, religious minorities and the implementation of the SDGs.

“In many countries, the existing simplistic and polarised fundamentalist narratives monopolise the public sphere. This hinders the task of those who try to bridge the gap with balanced views that acknowledge the multi-causal nature of poverty, conflict, exclusion, discrimination and hate speech,” he said.

Marginalisation and discrimination are not isolated phenomena – they are the symptom of a broader mind-set which systematically denies rights to the different, the weak, the outsider, the foreigner and by doing so, endangers the rights of everyone,” continued De Faria.

Religious leaders have a key role to play in protecting the most vulnerable against the regression of their fundamental human rights. As faith is paramount in the lives of many, faith leaders should provide a way forward by engaging in this dialogue and ensuring that the protection of religious minorities, refugees and migrants takes a comprehensive, whole-of-society approach.

“Bearing in mind the unprecedented backlash on human rights across the world, ACT Alliance has decided to focus on leveraging, and providing a space for all progressive voices who want to protect and work for human rights, gender equality, climate justice, peace and human security, migration and humanitarian action. Religious leaders must act as a moral compass and welcome those who want to protect the most vulnerable against the regression of their fundamental human rights,” concluded De Faria.