Climate Change certainly has a gender and generational perspective

Fernanda Zúñiga Keim, Lutheran Church in Chile, recorded vlog for ACT as we continue to follow the climate negotiations happening this month online in preparation for COP26 in Glasgow later this year.  The English translation of her vlog is below: 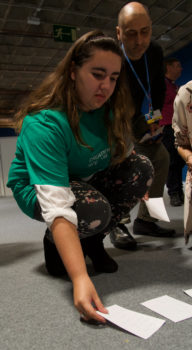 Fernanda Zúñiga Keim participating in a prayer vigil in the closing hours of COP25 in Madrid, Spain. Photo: Simon Chambers/ACT

I want the importance of ensuring gender justice in the climate field to be recognized, where the real impact of gender policy is seen, not only as those who suffer the consequences of the climate emergency, but also because gender does have a real impact on adaptation and mitigation measures. Women should not be included only because we are more vulnerable to the climate emergency, but because we bring different perspectives and experiences to the work.

Growing up in a faith community has allowed me to analyze and observe different aspects of climate change and how it affects people. For example, how there are communities that are not represented or how their voice is often minimized. In this sense, being part of a faith community has given me the duty to raise my voice for those who are most unprotected, it invites me to look out for those who need it most and has allowed me to find meaning in my work within the church, seeking to raise my voice for those who do not have the means to do so.