“El Hassake is thirsty” lamented the pastor of a Church in North East Syria. In her daily Facebook posts she shares pictures of thirsty 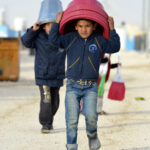 children either queuing to fill dirty plastic canisters with a few drops of water, or sitting miserably on pavements in the summer heat looking drowsy and unwashed.

Water shortages are a persistent problem in the Middle East and North Africa. It has intensified in the past ten years due to the rise in temperatures. Cities such as Baghdad, Kuwait and Muscat have recently witnessed record-breaking temperatures. Experts are predicting a 4-degree temperature increase for the region by the end of the 21st century – twice the global average.  This will make parts of the region uninhabitable.

This alarming change is not only expressing itself in heart-breaking images of thirsty children across the Middle East. It has also contributed to a number of developing and nascent conflicts. The intense pressure on agriculture and crops and the scarcity of water started driving populations out of rural farming areas and into already crowded urban centres in the 2000s. Climate-induced economic despair compounded other existing problems such as poverty, unemployment and social tensions. It has expressed itself in violent responses to the scarcity of resources.

We have seen this most clearly in countries like Syria and Iraq. Various groups have controlled the dams that provide drinking water, electricity, and irrigation along the Tigris and Euphrates rivers. Millions of people who depend upon this water for survival have been left to deal with desertification and increasing drought. Climate change threatens to make these once gushing rivers disappear.

This situation is aggravated by the fact that nearly every country in the region from Egypt to Iran shares water resources with a neighbor. The dispute over the Nile River illustrates the tension. As Ethiopia builds the Grand Renaissance Dam to alleviate its power shortage, it threatens to decrease by a quarter the water flow into Egypt. This will deprive around 100 million people of a vital water supply. This already tense situation is worsened by the disruption that climate change is causing to the flow of the Nile.

All these countries suffer from unstable regimes and governments that are unable to face the challenges ahead. The situation in Lebanon is a case in point, where a fragile system is breaking down in the face of climate threats. As Lebanon experiences one of the worst economic crises in the world its ability to provide power and manage resources is highly impeded. This has severe repercussions for treating and pumping water, causing 70 per cent of the population to face a critical water shortage. This is particularly true in areas where there is a high concentration of Syrian refugees, as in the North and the Bekaa valley where water demand has far exceeded availability. The economic collapse has meant that for a large portion of the population alternative clean water sources have become unaffordable.

More and more children and adults will be yearning for a drop of water if the rise in temperature is not soon mitigated. A vulnerable region such as the Middle East with its compounded problems needs speedy action for survival!

Rev. Dr. Rima Nasrallah is Chair of the Ecojustice committee of the Middle East Council of Churches (MECC). 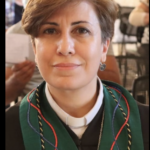