A game changer on climate induced loss and damage? 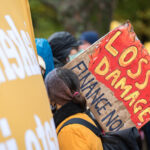 Over the last year, climate induced loss and damage has been the source of conflict in UN climate talks. Developing countries are united in their call for support in situations where adaptation measures are inadequate; where people, communities and even countries face loss and damage. Developed countries have been equally united in their reluctance to address loss and damage, fearing that doing so would lead to a rapidly growing bill they may have to pay.

The new report from the Intergovernmental Panel on Climate Change (IPCC) makes it clear that there are limits to adaptation, and that there are situations where loss and damage is the sad reality.

IPCC differentiates between “hard” and “soft” limits to adaptation. Hard limits refer to situations where adaptation is no longer an option. When sea levels rise, or when farmland becomes desert, land is lost and affected communities must move to new locations.

Soft limits to adaptation should be handled through scaled up investment. Adaptation solutions exist, and IPCC and many other organizations offer valuable guidance on how to implement them. Yet there is often a lack of finance, technology, or necessary adaptation measures to do so. The need for scaled up adaptation finance was one of the issues discussed last year at Glasgow’s COP26, the UN climate summit.

Hard limits will be more difficult to handle. When coral reefs die, and when islands disappear under the ocean, we will talk about loss and damage. The final solution will be migration, or relocation due to loss. While many people will have moved before the hard limit of adaptation is reached, the challenges related to the loss remain. Where should people go? What kind of loss have they faced? Loss of property? Loss of cultural and historic locations?

IPCC reports are signed and approved by all governments. This means that both developed and developing countries have now acknowledged scientific research on climate induced loss and damage. Will this be a game changer? Will it affect parties’ positions when they meet again for the annual UN climate negotiations? I hope the IPCC report will contribute to the dialogue, and that those talks can now focus on how to assist those who are most affected.

We have run out of time for diplomatic fights. The next time the parties meet, we need constructive talks and progress. The IPCC report paints a gloomy picture of our future, but it also lists what we must do. It is time for climate action.