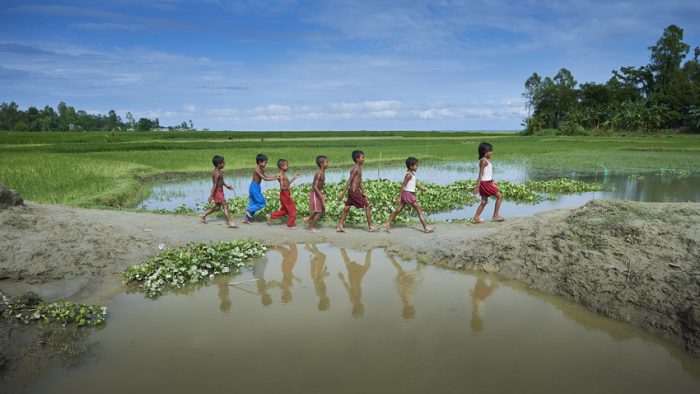 Children walk along an eroded path in Kunderpara, a village on an island in the Brahmaputra River in northern Bangladesh. Severe flooding in August 2017 eroded village farms and damaged houses. Photo: Paul Jeffrey

In July 2017, monsoon rains across Bangladesh and upstream areas in India and Nepal, gradually led to severe flooding.  Over 650,000 hectares of standing crops were damaged. This effected the livelihood of affected population in these highly poverty-stricken areas as their dominant livelihood activity is subsistence farming, and also casual labor (around 65 percent households depend on agriculture, while roughly 27 percent households depend on agricultural labor i.e. low valued daily wage labor). According to reports, the poor and ultra-poor families had no food to eat.

As flood-damaged crops, both at the homesteads and commercial agricultural lands, some common varieties of crop and vegetable seeds were also distributed among the affected people for recovering their losses. The seeds included maize, bottle gourd, country bean, sweet gourd, red amaranth, spinach, radish, and chili. After receiving the seeds, farmers cultivated their lands as per the guidance received from our field staff.

By now, they have already harvested red amaranth, spinach and radish for both consumption and commercial purpose. Bottle gourd, country bean, sweet gourd and chili are now growing in their fields. They are consuming these vegetables with their family members to meet their daily nutritional requirement, while the surplus amount is sold to bring income for the household. The beneficiaries also cultivated maize for the last two months and they are hoping for maximum production, which can again bring additional income.