[COP23 Press Release] The Implementation of the Paris Agreement must protect and promote the principles of human rights, gender justice and equity 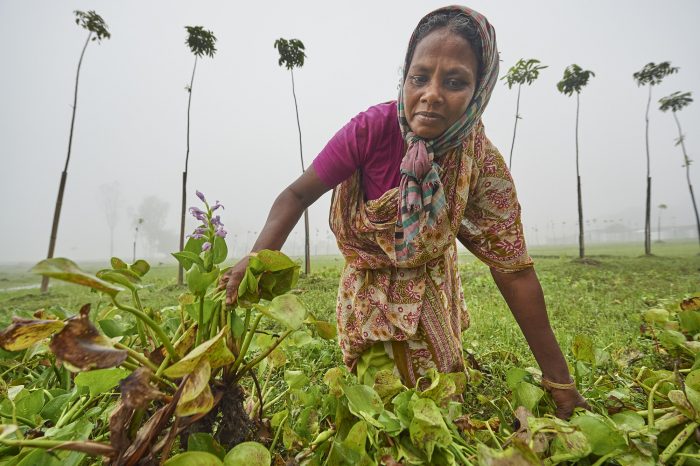 Sornolota Kisku harvests plants to feed her pigs in Suihari in northern Bangladesh. Devastating floods in August 2017 affected thousands of families across the region, and Christian Aid and the Christian Commission for Development Bangladesh, both members of the ACT Alliance, worked together to provide emergency food packages to vulnerable families, including Kisku. (Credit: Paul Jeffrey)

ACT Alliance, a network of 146 faith based organizations and churches based in 125 countries around the world has called for an implementation pathway of the Paris Agreement that adheres to the key principles of human rights, gender justice and equity.

COP23 will be the first COP presided over by the Pacific Island of Fiji, a climate vulnerable country that understands all too well the impacts of climate change. As COP23 kicks off on Monday, ACT Alliance has stressed the importance of its outcome for securing adequate provisions to facilitate climate resilience for the most vulnerable in adapting to and addressing climate change.

“Climate change is a devastating reality for our members who are rooted in communities that have been made vulnerable by climate change. As climate change threatens communities, ecosystems, human rights and essentially survival, it is evident in our work that it places a disproportionate burden on the poor, who have little capacity to adapt. For us as an Alliance, climate change is very much an issue of justice,” said Rudelmar Bueno de Faria, general secretary of the ACT Alliance.

He continued, “This COP presents us with an opportunity to further our solidarity with climate vulnerable people and communities. We call for adequate provisions on climate finance for addressing adaptation and loss and damage, while recognizing the stark reality of non-economic losses and damages”.

COP23, will set the stage for various technical and policy components of the implementation of the Paris Agreement.

“COP23 is essential to building on the progress made since the adoption of the Paris Agreement in 2015. COP23 has the potential to enhance climate action through an ambitious foundation of the ‘Paris rulebook’” said Dinesh.

He continued, “A spirit of collaboration, such as that evident in Paris will be important here in Bonn to build the conditions necessary for enhanced 2020 ambition.”