[COP24] Addressing Climate Induced Migration- A side event at COP24 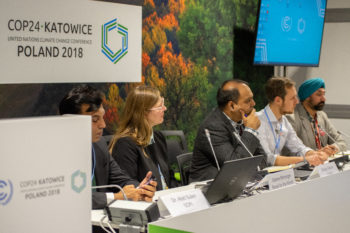 Over 28,000 people from around the world are gathered in Katowice, Poland for the international climate conference known as COP24.  This event is key to negotiations on how to implement the Paris Agreement that was reached in 2015.  The Paris Agreement set the ambition for the world to keep global temperature rise to 1.5°C.  What is needed now is the rulebook to detail how the ambition will be achieved.

The ACT delegation at COP24 is very active in following the negotiations, raising awareness, and advocating for the needs of the most vulnerable people and communities in the world, who are often the ones already experiencing the brunt of climate-induced impacts including droughts and floods, and rising sea level that is swallowing Pacific islands.

People who are forcibly displaced by climate effects are made very vulnerable.  Sabine Minninger of BftW spoke about the links between the Global Compact for Refugees (GCR) and the Global Compact for Safe, Orderly and Regular Migration (GCM) and the negotiations happening at COP24.  The GCM in particular contains specific articles relating to climate induced migration.

“The risk [to people forced to migrate due to climate change] is so huge.  We know from the IPCC report that climate change could increase, and therefore the impacts and loss and damage will increase and that it will put more people at risk to migrate or to flee,” Minninger said.

“It is so important that people have the chance to do a planned resettlement or migration.  I interviewed school girls from Tuvalu who said that they will never be refugees. That means they are stateless, homeless.  So they are not leaving Tuvalu.  The world community should ensure that they keep global warming at a low level so that the people of Tuvalu can remain on their island state.  If worst comes to worst, it has to be planned so that they do not become second class citizens- they do not want to live in a ghetto of Pacific islanders behind the airport in Aukland, New Zealand.”  It was clear that these girls did not want to flee their homes.

The ACT report examines a variety of countries around the world, and notes that Africa and Asia are projected to experience 75 per cent of the global risks associated with increased temperatures, putting a tremendous burden on governments to achieve the SDGs.

By sharing concrete experiences and best practices, as well as research into the impacts of climate change on migration, the panel and participants explored ways forward in addressing the increasingly difficult problem of climate induced migration.