[COP24] Blog: Salvation in a Time of Climate Change 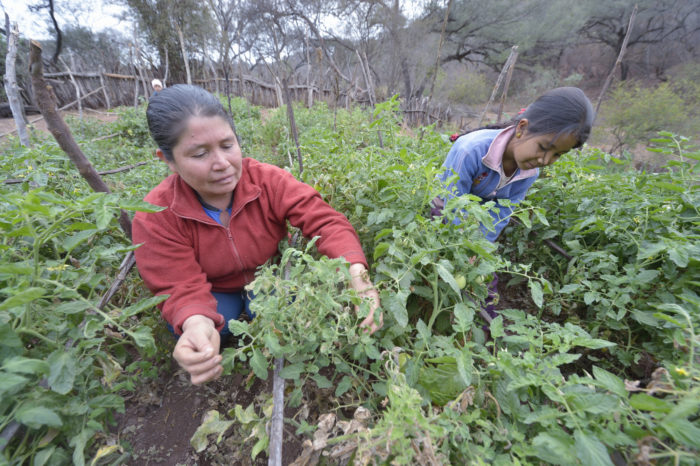 Rosa Antesano and her daughter Mariaa Griselda work in their garden in the Guarani indigenous village of Choroquepiao, in the Chaco region of Bolivia. They and their neighbors started the gardens with assistance from Church World Service, supplementing their corn-based diet with nutritious vegetables and fruits. Credit: Paul Jeffrey

Now that the reality of accelerated climate disruption is pushing either the throttle – or the panic button, people are looking for a way around or a way out of the existential threat facing the entire world. But what does salvation from such an unprecedented nightmare look like? What action must it entail? What rules must be agreed to and what behaviour brought into line to switch the dial to a more manageable trajectory? We have the vision and plan in the Paris Agreement, to be sure, but now we need the Rulebook to set it in motion – hopefully in time.

When Moses went up to Mount Sinai to get the Rulebook for his time and his people’s salvation he was given not just ten articles on a tablet, but a whole system change with social, political, environmental and economic provisions and rules. It was a new comprehensive way of living and accorded with God’s laws of justice and right relations.

But while he was formulating it the people grew restless and unfaithful and made sacrifices to the idol of the Golden Calf, partying and revelling as if there were no tomorrow. When he came down from the mountain he broke the tablets, calling for God’s wrath and judgement to punish their wickedness. Eventually, these stiff-necked people repented, promised to change their ways, and God relented, entering a covenant with them which would lead to prosperity and peace.

So will the leaders at COP24 find the moral courage to create a new Rulebook, that is comprehensive, equitable, sustainable and leads the way towards a just transition? Will they adopt a framework of action to avert the worst of climate impacts and rapidly increase ambition? Will they hold each other accountable and truly measure the implementation of their good intentions? Will they enter into a new covenant for survival?

And will the people agree to stop worshipping the idol Money and learn to share the resources of this wondrous gift of Creation and preserve its beauty and fecundity for the good of themselves, their descendants, and all creatures? Or will our stubborn selfishness bring about the doom prophesied by science? What are we prepared to sacrifice today for the right to and the possibility of a less hazardous future?

We now stand on a precipice unlike any other and can decide what our mutual salvation must be. We know now how much has already been damaged and lost, with more to come. We understand that the current economic system will not sustain and must be radically changed to be more equitable and just. We are aware that old institutional arrangements based on power and greed require systemic change if we as a species are to survive past this century. At this moment in history, we still have the possibility to create an ecological civilization. We have the power to turn towards a better way of living, an ancient way of being community known to Indigenous peoples and our ancestors. We can choose between life and death.

Joy Kennedy is a committed activist on issues related to ecojustice, poverty, wealth and climate change, most recently at the Canadian Council of Churches, the United Church of Canada and Kairos Canada. She is a long-standing member of the World Council of Churches Climate Change Working Group, participates in the United Nations Climate Change processes and several multi-stakeholder and interfaith dialogues, and chairs the board of Climate Action Network (CAN-Rac) Canada, an organization of 116 member organizations. She is a grandmother working for the vision of a just and sustainable future for all life on this planet.