[COP25 Blog]: What has the care for creation and care for humanity to do with Human Rights?

12th December 2019
Hardly a week passes by without the disturbing news of defenders of human rights being targeted and murdered in different parts of the world. Most of them are Indigenous people or are people defending the rights of Indigenous communities. Many indigenous people are being killed, marginalized, exploited and expelled from their lands by people who target the resources of those lands and water bodies.
At least 164 land and environmental activists were murdered last year for defending their homes, land and natural resources from exploitation by mining, food and logging firms. How are the rights and entitlements of 5 per cent of the world’s population of Indigenous peoples linked to the very survival of humanity facing a climate emergency?
80 per cent of the world’s biodiversity is protected on 28 per cent of the world’s land surface. These areas are ecologically intact and are diverse forest areas, which are primarily managed by indigenous peoples and families. These territories and forests are crucial for curbing gas emissions and for maintaining biodiversity. The genetic pool for plants and animal species found in the lands,  rivers, lakes and marine areas are being guarded and preserved by the indigenous people who are living naturally sustainable lives.
Indigenous people are among the last people whose culture, knowledge and way of living reminds and teaches us how to live close to the earth, valuing and respecting the environment. Indigenous foods are also particularly nutritious, and their associated food systems are remarkably climate-resilient and well-adapted to the environment.
Through the millennia, indigenous peoples have developed agricultural techniques that are adapted to extreme environments, like the high altitudes, dry grasslands or marshy environments. Their time-tested techniques, such as terracing to prevent soil erosion or floating gardens to make use of flooded fields, are well suited for increasingly extreme weather events and temperature changes brought on by climate change.
Ensuring the human rights of even the most vulnerable communities and making sure that different species- both plants and animals are protected in order to secure the food sovereignty of the people of the world- are all interconnected and interdependent.
Let us not cut off our hands that have taught us to feed. Let us not cut off our feet that are still firmly rooted on this earth. Let us not allow our greed and insensitivity destroy the one body that is humanity.
Together, respecting and caring for each other and creation, we will flourish; divided, we surely perish! 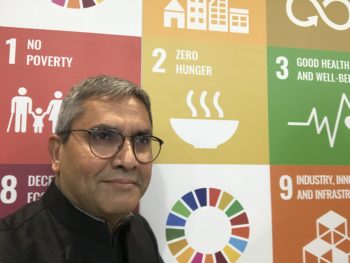