COP27’s theme is “Together for Implementation.” Since the first COP 30 years ago, vulnerable populations and countries have fought valiantly to adapt to the effects of 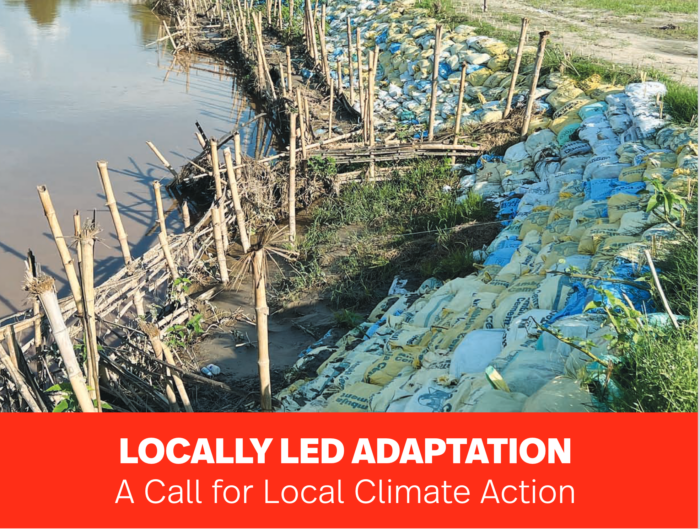 climate change, yet their voices are still not heard. Vulnerability to climate change has added another degree of stress to countries such as mine. Vulnerable communities in Nepal have been using local knowledge and practices to adapt to changing economic, ecological, and social dynamics caused by a changing climate. Unfortunately, such local practices have had very limited attention.

At COP26, global leaders and funders announced the mobilisation of more than USD 450 million to implement locally led approaches to building climate resilience. But there is limited information on how much has been mobilised so far and what the activities are on the ground. To better understand the knowledge of local people on climate change and adaptation, study was launched in Nepal.  The result is “Locally Led Adaptation; A Call for Local Action,” available at COP27.

The study found that most local communities were familiar with the term “climate change” and had experienced its impacts. They included drought; extreme and unpredictable rainfall; landslides; flooding; inundations; increasing temperatures; shorter winter periods; the continued reduction of agricultural productivity; and siltation. Respondents shared examples of the impacts on their lives, such as drought resulting in a walk of 1.5 to 2 hours to fetch drinking water. As well, the impact on agriculture and threats to their socio-cultural traditions were documented.

The study also identified some very interesting local adaptation practices. Communities in Dailekh have built solar water-lifting schemes to supply drinking and irrigation water. They built plastic ponds in fields to collect rainwater, which allows them to irrigate during the dry season. They were found to practice drip irrigation for off-season vegetable farming and were sowing hybrid seeds and restoring forests to allow water to be replenished.

In Bardiya, Rajapur, collective efforts were quite visible. Communities cleaned the irrigation canal just before the monsoon and constructed bio-check dams to prevent flooding. The Badghars, locally recognised community leaders, were hugely influential in mobilising the community to operate an early warning system during emergencies. They also developed plans, including for adaptation.

Communities in Kanchanpur have introduced various nature-based solutions. These include ecosystem-based adaptations such as restoring ponds and forests; planting alternative cash crops, such as lemons, bananas and medicinal herbs; and managing community forests. Yet local initiatives such as these, with the potential to be integrated into local adaptation strategies and programmes, have received very little attention from local government.

Local communities and their institutions, which include forest user groups, women’s groups, youth groups, Indigenous groups, and the Badghar, must be included by local government in addressing climate change vulnerabilities. However, this was not the case in the study area. Building their capacity to improve and share their local knowledge will improve their ability to meet the challenges of building resilience.

Locally Led Adaptation (LLA) and its core principles are meant to assist communities in developing and implementing solutions by enabling, fostering, and using their enormous potential for innovation. Nepalese communities are, in fact, developing locally driven solutions for local adaptation plans. These are meant to assist communities in adapting to the effects of climate change. The challenge of the decade remains how to support and finance initiatives promoting climate resilience.

LLA and its significance has gained attention on a global scale. I hope that at this COP over the next few days governmental and non-governmental organisations will recognise and find ways to adequately support locally led adaptation. Going forward, I hope donor organisations and development partners will increase their funding through easily accessible mechanisms.

The report can be downloaded here.