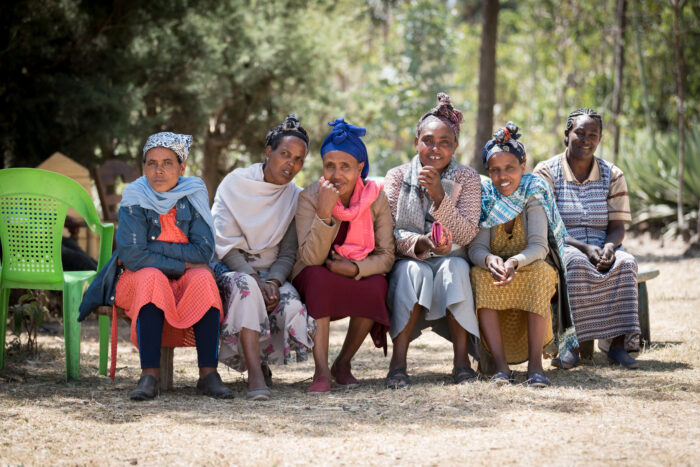 “Collecting water and firewood is 100 percent the responsibility of women and girls,” says Dawit. “Because of deforestation, because the water table is dwindling, the burden on women is much higher.”  Where it once took 20 minutes for a woman or girl to fetch water, it might now take an hour.

In Ethiopia, the main source of livelihood is agriculture. Because of climate change, rain patterns have changed, the temperature is rising, and the moisture of the soil has decreased, leading to lower agricultural productivity.

“Women are the ones who are responsible to feed their family,” says Bikila. “They are also the ones with very low opportunity for non-agricultural incomes.” While women may occasionally participate in small-scale businesses such as selling crafts, whenever agricultural productivity decreases, their livelihood options also decrease.

Without an education, women rarely participate in formal employment.  “Women are the ones who shoulder the burden of the climate change impact,” says Bikila. “That’s why we say climate change disproportionately affects women.”

“Climate change and gender justice are really inseparable,” says Bikila. The ACT Ethiopia Forum recently completed a major study exploring how to integrate gender justice into its climate justice work and that of various levels of the Ethiopian government. The report, Ethiopia: Nuances of the UNFCCC Gender Action Plan and its policy recommendations have been presented to Ethiopian government officials.

The ACT Ethiopia Forum has been engaged in building the capacity of its members on the basic principles of gender justice. “We have a male-dominant society, and people don’t understand these issues. It’s about translating, helping people to understand,” says Dawit.  “We want to translate gender justice into the activities of the members.”

“In all the interventions we are planning, gender justice is very, very important,” he adds. “We’re just at the beginning. I am very optimistic our work will bring some visible change.”

This article is taken from a longer ACT interview with Bikila Abeya and Dawit Beza in December 2021, following COP26. A short version of the interview is here: https://actalliance.org/act-news/its-good-to-swim-together-act-ethiopia-delegates-reflect-on-cop26/