COP27 from a distance: prayer and advocacy 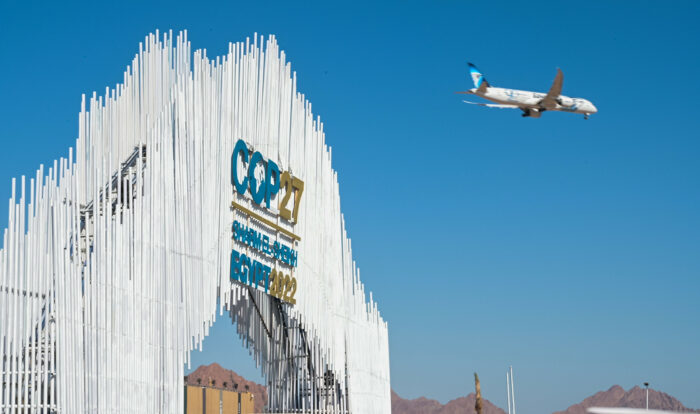 Many ACT members followed the COP27 negotiations from a distance, both with advocacy and prayer. PHOTO: Albin Hillert/LWF

Faith based organisations including ACT Alliance were able to send a few members as delegates to COP27, the annual UN climate conference, held this year in Egypt. But many more ACT members followed the negotiations from a distance, through Twitter, e mail, What’s App and other channels including ACT News. They supported the negotiations in many ways; by following, reading, sharing FBO’s news and tweets, through advocacy and through prayer. This story illustrates how one thwarted COP27 delegate ended up in two other countries prayerfully supporting both the COP27 and COP28 negotiations.

On good days and on perplexing days, say one’s mantra and follow the light. In recent days, I have had an unexpected experience of divine providence and presence. This has been whilst saying my mantra, ‘Jesus have mercy’, and following where the light seems to lead! It seems an experience both personal but also evidencing the yearning of our humble God for the well-being of all living beings, now and future. That is a big statement but here is the explanation.

After having devoted my energies to helping COP27 as best I could, at the last minute I and many others were prevented from attending.  Our hotels cancelled our accommodation (already paid for and confirmed), then gave these rooms to those able and willing to pay highly inflated prices. For me, in Australia, there was no time to know if anything would be available, let alone what might be the profiteering price. Some people I subsequently spoke to paid quadrupled prices.

So it goes. As Fr. Laurence Freeman reminded us later in the week, St. Ignatius of Loyola had a fifteen-minute rule for dealing with disappointments and opposition. “It would take me fifteen minutes to compose myself. Then I’d carry on,” he apparently said.  So, what happened next?

Rabbi Alon Goshen-Gottstein and those organising the “Return to Mt Sinai” Ceremony in Egypt also had difficulties. With little time, they somehow moved the Ceremony from Mt Sinai to London. I was invited to join them and composed myself during a long flight, although not quite in St. Ignatius time frame! Rabbi Alon had many experiences of bounteous providence and many sleepless nights. Miraculously, he brought our small group together in London on the same day we had expected to be in St Katherine’s monastery on Mt Sinai! Rabbi Alon is one of those energetic souls upon whom progress depends.

The hospitality and enthusiasm of the Jewish community in London also made this possible. As an aside, being in the Jewish community in North London made me vividly aware of the consequences of antisemitism. Even today, the entrance to some synagogues do not convey whose spiritual home this is, for fear of attacks. Other places have security guards at the gates. Being in that community on the Friday and Saturday of Shabbat, also reminded me of the resilient strength and beauty of Jewish faith and culture.

For three days, our small interfaith group worked on ‘Ten Principles of Climate Repentance’, echoing Moses’ encounter with the divine on Mt Sinai. We hope this will be of enduring benefit. We were very mindful, as we worked, of those engaged in demanding negotiations at COP27. Late on the following Sunday, led by Archbishop Rowan Williams, we walked up Parliament Hill in London, chanting as we went, each taking a turn. Then we read the Ten Principles that we pray will bring more heartfelt commitments to help prevent further catastrophic climate events. Our prayers were and are with those implementing the agenda of COP27 and COP28 next year in Dubai. We pray that this all happens before time runs out. We pray the containment of global warming to the target 1.5 degrees is achieved.  As the Ten Principles were read, with silence between each, the crowd that had gathered (and some just happened to be on the hill for recreation) entered into the poignancy and solemnity of the occasion.

At the end there was a deep bond of friendship between us all. Discerning, each from our traditions, the wisdom that might help in this time of crisis drew us all closer. More cooperative activity is planned.  For me, this was another experience of the unified and unifying consciousness that we share. Contemplative souls and little children intuit this. My reflection is that God is drawing us ever deeper into cooperation because of God’s love for all living beings. One experience of divine providence and presence therefore leads to the next. An apparent dead-end turns into a new possibility that is life-giving.

The famous hymn of John Henry Newman, so loved by Mahatma Gandhi, seems like our song afresh: “Lead kindly light, one step ahead for me.” The invitation to London then led into an invitation to join a retreat at the Bonnevaux Centre for the World Community of Christian Meditation in France. This was an opportunity to prayerfully support those at COP27, much as I had planned to do anyway. That prayerful support, as ever, merged with what solidarity in advocacy was and is possible, notably the faith leaders’ urgent call for increased ambition as COP27 drew to an end.

‘Silence is the deepest form of conversation’

Looking ahead, the theme of the Bonnevaux retreat speaks further into our direction. Fr. Lawrence Freeman explored the importance of contemplation in the shaping of truly civilising conversations. I was able to share a little of our work, both with Fr. Laurence and with young seeker Oliver from England. Oliver liked our book on Forgiveness and sent it on a journey that now includes young meditators in Brazil who are convened by Tayna Malaspina, WCCM Director of Meditation for Young People. Tayna  also makes olive oil. She carries her fondness for St. Francis and St. Clare into both her labelling and her meditative life. Those of us who meditate know, as Fr. Laurence said “silence is the deepest form of conversation.”  Within that is “the silent music of God,” in the beautiful phrase of St. John of the Cross. Equipped by grace and by sustained practice, the interior silence we acquire through meditation helps us to listen well and enter into conversations with a better awareness of our own motives and projections.

Always there remains the necessity to make the choice of words and actions which are the truest, kindest and most beautiful. My unexpected days were a renewal in this ‘wisdom for the common good’!

Bishop Philip Huggins is the director of Ecumenical Studies at the Australian Centre for Christianity and Culture.