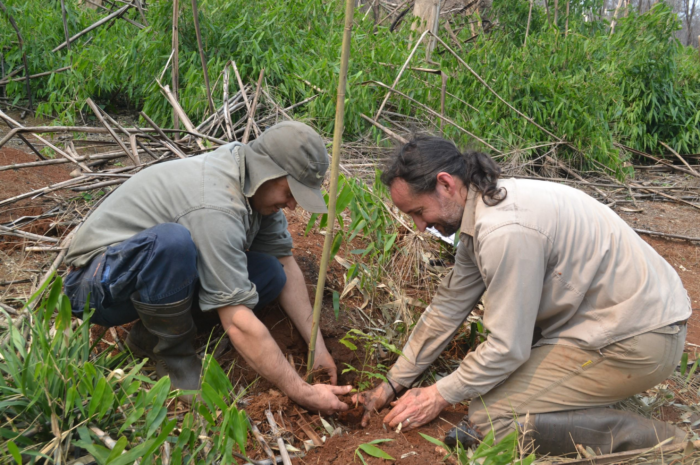 Solutions such as planting trees improve the environment and give communities hope. “They are achieving important things and know that improvements are possible,” says Romario Dohmann. PHOTO: Hora de Obrar/ACT

The project, which ran from 2016 until 2019, worked with selected communities in Argentina, Uruguay and Paraguay. It used theological reflection to encourage communities of faith to care for our common home, Earth, through innovations such as organic growing practices and fair trade.

“Local communities are experiencing the effects of climate change in their own flesh,” says Romario.  There have been deep droughts in the southern cone over the last few years. The region’s large rivers have historic low water levels, and there is a water crisis. In summer wildfires affect forests and fields.

“Some communities have had to adapt by changing their planting dates,” says Romario. “But we have also seen that when we increase trees and use alternative agricultural production methods there is more resilience to the changing climate.”

“The project developed to encourage alternatives to growing monocultures such as soy and depending on extractives for income,” says Romario. Such practices can damage soil and water and interfere with the production of nutritious food for local communities. “This met with resistance, as many local agricultural producers were exclusively dedicated to monocultures,” he says.

The project turned to theology to involve the communities, referencing ecotheology and ecological church policy. “We offered biblical reflection on the care of creation and how it could help communities live better,” says Romario. [They also developed materials for use in catechesis with children and in theological reflection with adults.]

The websites of both Hora de Obrar and the Evangelical Church of Rio de la Plata offer supportive material.

Results include Commission for the Care of Creation

The Commission for the Care of Creation grew out of the project and includes members from different districts, in particular women. “Seventy percent of the members of the Commission are women. They also make up 95 percent of those who educate communities,” says Romario.
They are also the ones who are most active in workshops about healthy eating and the impact of environmental issues on health.

“Communities can now assess how they produce food. The goal is universal access to healthy food through fair trade, based on theological and ethical perspectives,” says Romario.

“We were able to generate and accompany changes in environmental public policies in Misiones. A government platform of organic production was formed, with the mission to accompany producers who deliver healthy food,” says Romario of the Commission.  “The role of civil society is sometimes to be where the state cannot be present and promote these types of initiatives.”

“Local communities are engaged in concrete actions that may not have a big impact globally,” says Romario, “but are essential for them, as they are coming up with solutions.”  Recently, money from the Green Climate Fund has arrived in Argentina. In Misiones, Romario’s region in northern Argentina, the funds are earmarked for recovery from fires, water shortages, for emergency funds, early warning systems and to improve water access for rural populations.

“Highlighting local actions offers hope,” says Romario. “The communities want to communicate the message of hope. They are achieving important things and know that improvements are possible.”

“They have a message of hope, but decisions must be made now, there is no time to spare.”

Pablo Sagrado Martin is an ACT intern based in ACT’s Brussels office.