Cyclone Idai: One year later and thousands remain in need of support

March 2020 marked one year since Tropical Cyclone Idai struck parts of Mozambique, Malawi and Zimbabwe. The impacts of the cyclone displaced millions of people, claimed lives, livelihoods and caused widespread destruction which communities are yet to fully recover from.

ACT Alliance launched an appeal (SAF 191) to raise funds to respond to the recovery, livelihood and resilience needs of communities affected by Cyclone Idai. To date, USD 4, 584, 103 of the USD 8, 168, 517 appeal has been funded (approximately 60 per cent). 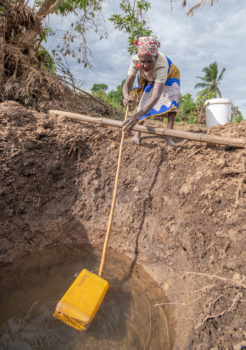 Cyclone Idai struck Mozambique just weeks before the annual harvest, destroying acres of farmland and crops and leaving thousands of people, particularly in the Sofala Province in need of food assistance. Through the ACT Appeal, over 5, 000 people were provided with food kits and cash assistance.

The cyclone triggered floods which contaminated many of the water bodies that people relied on. To reduce the risk of water-borne diseases, ACT members provided water treatment services to over 3, 000 households and constructed over 45 latrines for schools. Through the appeal, ACT members were also able to provide capacity building on hygiene practices and water resource management.

As a result of the severe destruction caused by the cyclone, there was also a need for psychosocial support in the various settlement camps. ACT members including Igreja Evangelica Lutheran Mozambique (IELM), Christian Council of Mozambique (CCM) and the Lutheran Church in Chimoio encouraged pastors and Bishops to visit several settlement camps which gave hope to many communities in the wake of the trauma caused by the disaster.

In Zimbabwe, ACT Alliance launched a hygiene awareness initiative to build the resilience and capacity of health workers so that communities would be better prepared should a similar disaster occur in the future. Through the appeal, ACT provided Water, Sanitation and Hygiene (WASH) kits to 1, 194 households. Despite these efforts, there is still a great need for hygiene kits for women.

Through the Appeal, ACT constructed 147 houses for families in the hard to reach districts of Chipinge, Buhera and Bikita. The decision to construct houses as opposed to providing temporary shelters was in line with the government of Zimbabwe’s long-term housing plan to support families whose homes were destroyed by the cyclone.

In addition to these services, ACT Alliance hosted sporting activities and provided psychosocial support to over 3, 000 people.  ACT member ACT Church of Sweden trained over 50 church leaders to offer psychological support to individuals, families and communities.

The ACT Zimbabwe Forum has an ongoing appeal related to drought, more information on this appeal is available here. 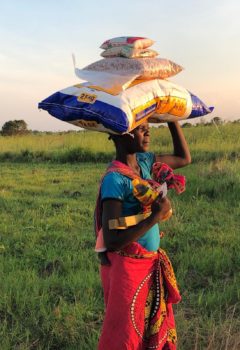 ACT members were the first agencies to bring relief supplies to villages in Nhamatanda District in Mozambique. Photo. Alwynn Javier/ACT

Through the ACT appeal, the ACT Malawi Forum supported 140 displaced families in the Nsanje District with tents. As communities in Malawi worked to rebuild their lives, many faced additional burdens as high temperatures and a worm infestation obliterated crops. In light of this, ACT provided 73 households with agriculture and irrigation tools and connected them to a small solar irrigation farm to support their agricultural efforts despite the dry conditions.

The Mozambique, Zimbabwe and Malawi Emergency Response to Cyclone Idai-SAF 191 is available here.