Super Typhoon Mangkhut locally named Ompong battered the province of Cagayan in the Philippines on September 14th 2018, destroying homes, severely affecting agricultural lands and livelihoods and damaging evacuation centres where residents fled for safety. Residents of the Sitio Laoc, Barangay Pateng, are still recovering from the effects of the typhoon.

“Every time it rains my children get scared that it will happen again,” said Rema Orden, a survivor of the typhoon and mother of two. “I will never forget how wet and cold my children were and how there was nothing that I could do.”

Sitio Laoc is predominantly a farming community of indigenous peoples who migrated to Cagayan in search of a better life. Many rely on their harvest for sustenance and live in poverty where basic amenities such as safe drinking and potable water are difficult to access. 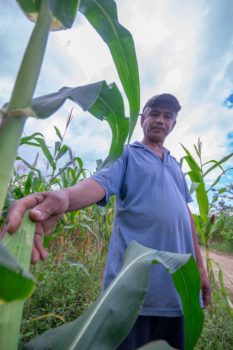 Alexander Cagut was one of the farmers who lost his crops to Typhoon Mangkhut. Using the support from ACT members he was able to plant new crops. Photo: Simon Chambers/ACT

Given the financial constraints of the community, many small-scale farmers in the Sitio Laoc have no choice but to borrow money from local investors to purchase seeds, fertiliser and other farming equipment, repaying the loans when they sell their crops. Farmers whose livelihoods are the most vulnerable to natural hazards faced the brunt of the impacts of Typhoon Mangkhut which destroyed their crops shortly before the harvesting season, leaving families unable to complete the planting cycle or repay their debts.

“My house was completely destroyed, and I lost most of my harvest,” said Valentino Gonzalez, a farmer from the Sitio Laoc. “I was only able to harvest 20 bags of rice which I shared with the other families who were affected by the typhoon,” he continued.

Gonzalez is one of the many farmers whose debt has increased since the typhoon. “This typhoon doubled our debt because we still had to buy seeds for the following planting cycle even though we were not able to sell any of our harvest from the previous cycle,” said Valentino.

ACT Alliance member Christian Aid in partnership with the Humanitarian Response Consortium and the City Disaster Risk Reduction Management Council responded to the needs of the most affected residents of the Sitio Laoc. An unconditional cash transfer of USD 48 (based on the minimum monthly wage) was distributed to two hundred and fifty of the most vulnerable families in November 2018 to help them to get through the season.

“Typhoon Ompong has had a huge impact on our lives. The cash transfer has helped us to meet our daily needs and the needs of our children,” said seventy-eight-year-old Kag Asaid Gonzales.

While some families used the unconditional cash transfer to repair their homes and clear their debt, other families faced great difficulties getting back on their feet. 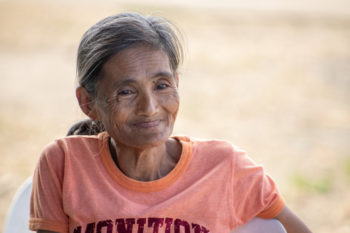 “Before my husband died we worked very hard to build our house. Typhoon Ompong has destroyed it. I am now living in my small store under a tree. Now I am the only one working to pay off our debts so it has doubled. With the support of ACT Alliance, I have been able to pay off some of my debt and to buy some rice. I have also kept a small amount of money in case there is another emergency,” said indigenous farmer Charlita Taoil.

Despite the challenges faced by the residents of the Sitio Laoc during and after the typhoon, a spirit of Bayanihan (community unity) prevailed. Residents shared whatever harvest they were able to salvage, and those whose houses remained intact took in other members of their Barangay.

“We planned to get to the evacuation centre but galvanised iron sheets were flying because of the strong winds, so we went to our neighbour’s house instead. We thought that there was no hope for another day, but we prayed as one family, asking for the guidance of the Lord. In times of disaster, the love of family becomes stronger,” said Larmie Bayangan. 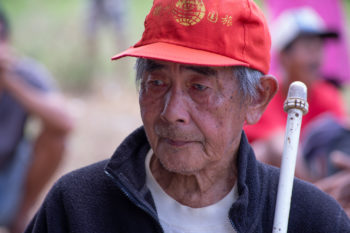 81 year old Juan Bainan is a farmer and one of the original settlers of Sitio Laoc. Photo: Simon Chambers/ACT

Eighty-one-year-old pioneer settler to the Sitio Laoc, Juan Bainan also emphasised the unity of the residents, “Even though we all came to Laoc from different tribes, through every disaster our spirit of Bayanihan has remained strong. I am proud to see that peace and unity prevail above all.”