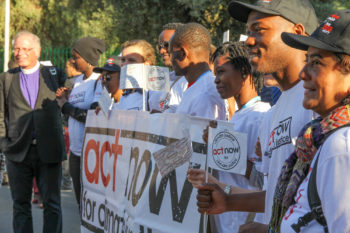 Without a fully engaged civil society, the SDGs are bound to fail. This is the main conclusion of the research and case studies done by Institute of Development Studies (IDS) and published in conjunction with ACT Alliance in the report Development Needs Civil Society– The Implications of Civic Space for the Sustainable Development Goals.

Shrinking civic space is likely to halt or reverse progress towards reducing inequality, insuring inclusion, and improving sustainability, because it is often precisely those who are marginalized who are at the greatest risk of being ‘left behind by development’. Examples in the report show how restrictions on civic space have already affected and are likely to further impact adversely on the number of SDGs, as outlined below. The study concludes that for development to be sustainable over time and for the benefit of all, civic space is needed.

Key findings
I.      The shrinking space of civil society hinders social and -economic development and hinders achievement of the Sustainable Development Goals (SDGs.
II.     Restrictions on civic space prevent Civil Society Organizations (CSOs) from engaging in policy formulation, monitoring rights, raising awareness, championing the voices of vulnerable populations, and from building partnerships.
III.    When civic space is limited, development risks excluding voices and increasing social distrust. Ultimately, this increases inequalities and makes development less sustainable.
IV.     Civic space is essential to provide transparent and verifiable information. If objective data is absent due to shrinking civic space, trust in official data and political performance is likely to decrease.
V.      Weakening of civil society may increase a permissive culture of corruption among elite groups without sufficient checks and balances. Not only could this erode trust in governance, but it could also trigger significant economic, food and political crises.
VI.     Overemphasis on huge infrastructure projects and economic growth increasingly competes with the discourse of inclusion and thereby puts the key SDG principle of “leaving no one behind” at risk. 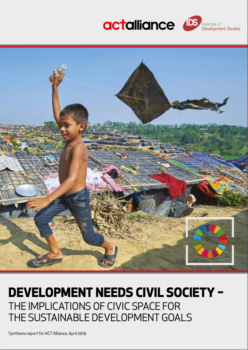 The study was carried out in 2017 and 2018 by IDS for ACT Alliance. It examines civil society in its role and function of enhancing service delivery, collecting information and evidence, analyzing data, holding governments to account, advocacy, shaping public policy, ensuring the voices of vulnerable are considered, defending human rights and contributing to global governance.

Drawing on four country case studies carried out in Brazil, Cambodia, Nepal, and Zimbabwe, and on 12 desk-based country studies, the report analyzes the pivotal role civil society has played in achieving the SDGs.

Civic space is changing in terms of who participates and how. Dwindling civic space limits liberal human rights actors while widening the influence of right-wing, extremist and conservative groups. The growth of digital space has reshaped civic space for all actors and helped unruly protest movements to take up more space.

Political elites close civic space as part of national struggles over political and economic power. Conflicts over the use of natural resources and land have been found to be key reasons why civic space is restricted.

Most governments have strong incentives to demonstrate that they are making substantial progress in their development goals. Their legitimacy depends on that performance. For this reason, governments have numerous instrumental or pragmatic reasons for promoting civic space:

1)      External scrutiny by social actors and independent analysis is essential for highlighting the impacts of economic and social trends and for identifying groups at risk of being left behind or adversely affected by policies. Civil society participation in the design, monitoring, and evaluation of public policy is thus of vital importance. Without civil society activism, policies may go unchecked, with no available avenues for potential alternatives to be raised. Policies developed in open and transparent spaces are potentially better policies.

2)      Citizens – in particular marginalised groups – must be able to hold the providers of basic public services accountable for equitable delivery of services such as education, health, water and sanitation, housing, safety and justice. Governments routinely struggle to improve the quality of public services, but shrinking and closing civic space and violating fundamental freedoms excludes citizens from addressing challenges in the delivery of basic public services. The ‘leave no one behind’ principle commits governments to reaching the most marginalised populations. Their voices must be heard, and their active participation as agents of change needs to be promoted.

3)      Clamping down on information-sharing and scrutiny of public affairs has counter-productive effects, as public trust is undermined when governments control the flow of information. In the absence of independent scrutiny and analysis of official statistics, methodologies and sources, public experts and development partners are often suspicious of official data.