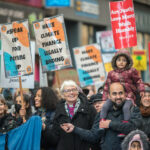 It’s been more than a month since COP26 ended, and the world continues to reflect on the results of the two weeks of negotiations hosted by the UNFCCC in Glasgow in November.

Featuring observations by COP26 ecumenical participants, the COP26 Ecumenical Preliminary Analysis – End of Summit offers rich reflection and analysis on both the results of the summit and ecumenical collaboration at COP26.

“Youth are now and will continue to be disproportionately affected by climate change in the coming decades and implore world leaders to stop selling off their future,” said Savanna Sullivan, the LWF Program Executive for Youth, and a COP26 observer. “We are deeply concerned about the Glasgow result. Despite some progress, we are still far from solving the climate crisis, and we will need a drastic increase in the ambition of all parties.”

ACT Alliance, the Lutheran World Federation (LWF), the World Council of Churches (WCC) and their members followed the summit closely. “We feel that there is still a lot that must be done to achieve climate justice, particularly for communities in the Global South,” says the document, pointing out that the people who face the worst effects of climate change have done the least to contribute to it.

A commitment to the Santiago Network on Loss and Damage is one step forward at COP26. “[It] will be crucial in strengthening the technical capacity of Global South governments to bear the shocks of climate change,” said Patriciah Roy Akullo of DanChurchAid Uganda. There are caveats. “[The network’s] technical capacity must be complemented by the provision of new and additional loss and damage finance,” said Julius Mbatia, ACT Alliance Climate Justice Manager. This will be needed to fund interventions that will help vulnerable communities affected by the climate crisis.

“As people of faith, we are disappointed but not disheartened by the lack of concrete results from COP26,” say the document authors. “As partners in the ecumenical movement, we will continue to care for creation, work for climate justice, and stand with the most vulnerable. We call on churches worldwide to keep raising their voices for creation and for climate justice.”

“If the goal to stay below 1.5 degrees is to be reached, all parts of global society should be included. The Glasgow Climate Pact mentions the importance of collaborations with civil society and many groups but not faith groups,” said Rev. Henrik Grape, coordinator of the WCC working group on Climate Change. People of faith need to be included in the global discussions to move forward.

Preparations are underway for COP27, scheduled to be held in Egypt from 7 to 18 November 2022. It will be an important meeting.

Follow ACT Alliance’s Twitter account, ACT Now for Climate Justice, for ongoing analysis, news and actions that you can take to influence pre-COP27 preparation meetings.  Join us in working together for a just result at COP27.