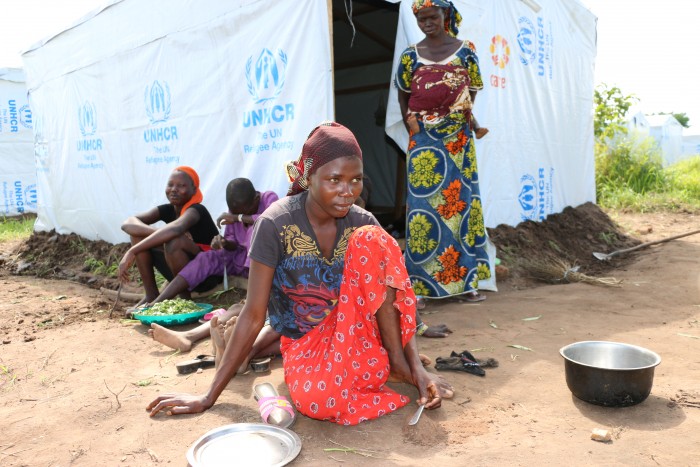 Chad currently hosts nearly 400,000 refugees. Recently, over 6,000 people have sought refuge in the country from neighbouring Central African Republic. The refugees often live in dire conditions. Belmi is one of them. Photo: Daouda GUIROU/LWF

Diba, southern Chad – Sitting on bare ground, Belmi Mercy seems worried. In her left hand, she holds a teaspoon. She scratches the surface of the ground with it occasionally. A cooking pot vaguely lies close to her. Normally, at this time of the day, the pot should already be set on fire for cooking. The 22 years old woman is visibly anxious or even traumatised.

Nearly a month ago, she had to flee her native village N‘gaounday, in Central African Republic, due to recurring violence between armed groups.

‘‘I used to flee many times in bush, and come back again a few days later‘‘ she said, ‘‘but this time, they [the armed groups] killed 9 people in my neighborhood. It was panic everywhere. I came very close to death, and I decided to leave.”

Belmi left her village with her two sons to cross the border. ACT Alliance member The Lutheran World Federation (LWF) team accommodated her in the village of Mini in Chad, under the supervision of UNHCR, and CNARR(the national commission in charge of refugees). Belmi received a hot meal. For the first time, since a couple of days, she had enough to eat with her children.

Few days later, Belmi and her kids were transferred to a safer place at Diba. A small village located over 40 km from the border. There, with the support of UNHCR, Belmi found a shelter – a plastic tent. She also received sleeping mats, cooking pots and few other items for her basic needs.

FOOD RATION REDUCED BY HALF

Several thousand refugees, like Belmi, are facing food shortage in Chad. Due to the lack of funding, the monthly food ration provided to refugees, has been reduced by half.

‘‘Its currently lean period [when food stock dries out before the next harvest]. The reduction of food ration could increase level of malnutrition, especially among children and pregnant women.’‘ says Adamou Koumanda, LWF Representative in Chad, ‘‘we urgently need more funding to bring life-saving assistance to refugees‘‘.

In total, LWF is currently providing assistance to over 200,000 refugees and host communities in Chad, thanks to the support of UNHCR, WFP, BPRM (USA) and ACT member Diakonie Katastrophenhilfe (DKH/BMZ).