Washington, D.C. – Despite catastrophic storms, rising temperatures, severe droughts and other devastating environmental events, the United States has ignored its duty to act on the destructive effects of climate change domestically and around the world. In reaction to recent cuts to domestic environmental protection efforts and the denial of the effects that climate change has on the world’s most vulnerable and poorest communities, ACT members joined with a coalition of community and faith leaders from across the religious spectrum joined together on April 29, 2017 at an interfaith vigil to call on the United States to take immediate action on climate change.

Ahead of the People’s Climate March, the group called on lawmakers and leaders to take immediate action to protect our planet and address the impact climate change has on global issues such as natural disasters, hunger, poverty and immigration.

“Climate change impacts each and every one of us. Around the world, its effects are felt through rising temperatures, devastating storms, severe droughts and other environmental events. As people of faith and good conscience, we are called to protect our common home and stand with those who are most impacted by the effects of climate change,” said the Rev. John L. McCullough, President and CEO of Church World Service. “Serving as an international development and refugee resettlement organization, Church World Service remains committed to standing with the most vulnerable and holding our leaders accountable to addressing climate change. There is no denying the impact climate change has on communities around the world – the time to act is now.” 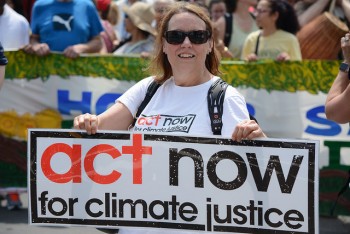 “The ACT Alliance brings together some 144 faith-based organisations working in 100 countries, and we all stand together to express deep concern for the consequences of climate change on the earth and its people. It is our moral responsibility to act first to support the most vulnerable people struggling to survive and adapt in climate affected regions, but we know that that alone is not enough,” said Alison Kelly, Sustainable Development and UN Representative with the ACT Alliance. “ACT is translating our ecological stewardship into concrete climate action through advocacy, speaking out for climate justice and holding our leaders to account for it. And from all across the world, we stand in solidarity with people of faith in the U.S. as they take action on climate change today.”

“Just as the climate is changing so too must the church change. We cannot – like those in the Capitol and down at the White House – stay walled up in our places of comfort and privilege. We must understand our complicity,” said the Rev. Dr. Susan Henry-Crowe, General Secretary of the United Methodist Church. “We must listen to the groaning of creation and to the stories and leadership of frontline communities. And we must step out boldly in solidarity with those who are interrupting systems of oppression and living out God’s radical expression of love for all of creation.”

“The Episcopal Church is committed to working in partnership with the many communities experiencing eco-injustice. Climate change menaces the lifeblood of our economy, our national security, and the very future of humanity and that of many other species. We’re in, as the thousands chanted in Marrakech last November, on fulfilling the U.S. commitment to the Paris Agreement. As people of faith, we must rise to the occasion to honor not only the Paris Agreement, but confront this enormous threat and live out our call to be stewards of God’s creation,” said the Rt. Rev. Marc Handley Andrus, Bishop of the Episcopal Diocese of California.

“Greed is dominating need. The earth, our first Mother, is a gift that not only have we come out of and remains a part of us, but also what we have inherited. We have a shared responsibility for not only what we leave but also how we treat what we inherit,” said Imam Talib Shareef of the Nation’s Mosque, Masjid Muhammad.  “Because the earth is a part of us, when we harm it we harm ourselves. Nearsightedness in our leaders’ attitudes towards climate changes have resulted in abuse of these gifts and has led to excessive pollution from fossil fuels, which are now threatening to destroy the very life, home, gifted to us by the Almighty.”

“We know beyond any doubt that both of these things are true: that people are hurting as a result of increasingly destructive weather patterns, and that we can do something about it,” said the Rev. Rob Keithan of All Souls Church Unitarian, representing the Unitarian Universalist Association. “To ignore or distract from this reality is to evade our most basic obligation as people of faith, which is to have compassion for those who are suffering.”

“Climate change is real and it is being felt by the most vulnerable around the world,” said Armele Vilceus, executive director of the Community Empowerment Network. “I strongly believe that standing together, we can break the vicious cycle of poverty caused by climate change!”