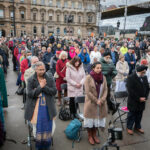 Time is running out.  As the COP26 negotiations reach a critical moment, members of the global faith community, led by our sisters and brothers from the Global South, call for urgent and ambitious action to deliver justice for the most vulnerable people and communities.
Where the current negotiation texts are failing:

The action we now need

World leaders must now step up and deliver a clear, actionable text that strengthens previous agreements and puts those living on the frontline of the climate crisis at its heart.

We call on world leaders at COP26 to preserve all of God’s Creation by: