Faith groups appealed to the G7: Take action, and care for the creation! 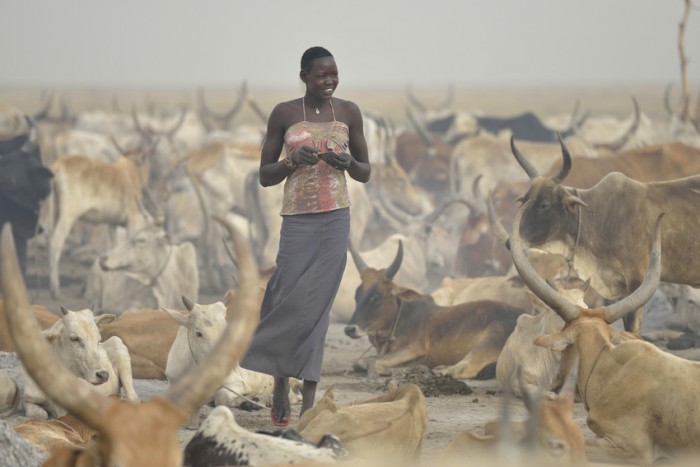 Drought and displacement have devastated cattle herds, which are the foundation of the local economy and culture, in South Sudan. Today, faith leaders call upon the G7 nations to be leaders in a green transformation towards a sustainable future. Photo: Paul Jeffrey/ACT

Christians, Muslims, Jews, Hindus and Buddhists. Big religions, each with its own beliefs and faiths. But also with a strong and united concern. On Friday, the eve of the G7 Environmental Ministerial Meeting in Bologna, faith leaders from some of the biggest religions in the world met and agreed on a joint statement to the G7 ministers.

The statement was formulated as a charter of values and actions, a message based on the belief that the world – nature, and the environment – is wonderful, and that we have a moral obligation to care for this miracle – the creation.

Each religion framed the concern in its own way, but each had the same message. We have the responsibility to take action, and to transform our way of life into a sustainable development path.

“We, as faith leaders and faith-based organizations, stand in solidarity with people and communities all over the world who are affected by the impacts of climate change and environmental degradation and commit to galvanizing greater awareness and action that promotes more sustainable consumption and lifestyles and protects our natural environment, both on land and water,” say faith leaders in the joint statement.

When faith leaders talk about the world they do not focus on countries as such.  When the world was created, there were no borders. And climate change knows no borders. Droughts and floods do not stop to clear customs, and the long term effects will fuel conflicts and migration with implications far beyond the borders of individual countries. At the same time, all global greenhouse gas emissions must be reduced. But this can only be achieved if all countries and all people engage. All countries must embrace a green and sustainable development paradigm, ensuring a resilient future for all people in the world.

So why was a call directed to the G7? All countries are important, but rich countries have special responsibilities for two reasons. First, they have a historic responsibility, linked to their large carbon emissions for decades, contributing to global warming. And second, because of their capacity to actually make a difference. A green transformation will not come by itself. It will be a result of innovation, technology development, and changes in our current development paradigm. And this is why the G7 is important. The G7 constitutes a group of countries with big responsibility, and big capacity. They can, and should, drive the transformation towards a green and sustainable future.

However, at this time, the G7 is not only a platform for discussion about development. This time the G7 meeting may also be a battlefield in a growing conflict between the current US government, and the other G7 countries. The Administrator of the Environmental Protection Agency in the US, Scott Pruitt, will face his first international diplomatic challenge since President Donald Trump announced that the US will withdraw from the Paris Agreement. When the G7 leaders recently met in Taormina, Sicily, Italy, climate change was also on the agenda, and Trump was isolated. Pruitt will most likely face the same situation. Mr. Pruitt was one of the persons who advised President Trump to withdraw, and he is known for his skepticism towards climate change. My guess is that he will have a difficult time defending and explaining the US decision when he meets his G7 colleagues.

In this context, the call from faith leaders contributes an additional critique. While the other G7 members will bring up arguments of security, economy, growth and development, faith leaders bring up the moral and ethical concern. Faith leaders stand, as they so often do, with the most vulnerable, the ones who have contributed the least to climate change and yet are disproportionately affected by it.

Together, faith leaders delivered their message of solidarity, calling on the G7 leaders—and all people—to take seriously the need to care for creation.

The full text of the joint statement can be found here: https://actalliance.org/wp-content/uploads/2017/06/CharterOfValuesAndAction-1.pdf

Mattias Söderberg, Senior advocacy advisor in DanChurchAid. Was elected co-chair for the ACT Alliance advisory group on climate change advocacy and was the acting head of the ACT delegations to UN climate talks from 2010 to 2015. Was co-chair of the ACT EU climate change working group from 2007 to 2009, and head of the ecumenical COP15 secretariat in 2009. Mattias is originally from Sweden, but lives in Denmark.